Sometimes in life, all it takes to get rich is dumb luck.

It was certainly dumb luck when, a few years back, a married couple was hiking with their dog in the foothills of Sierra Nevada, California. 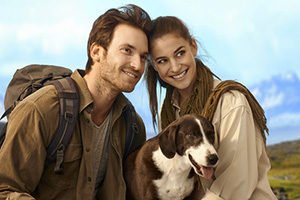 It was a path they had traveled many times before.

On this particular morning though, they happened to spot some rusty cans sticking out of the dirt.

Upon closer inspection, they found each was filled to the brim with 24k gold coins.

And they dated way back to the Gold Rush of the 1800s.

Their discovery later became known as the Saddle Ridge Treasure.

And it made them very rich… $10 MILLION RICH!

It was also dumb luck when, on a whim, an unemployed man named Thomas Higgins decided to take his metal detector to a field in Staffordshire, England.

It was here that he stumbled upon the largest Anglo-Saxon treasure hoard of all time.

Must See: This buried treasure story is going viral.

Buried beneath that field were 3,500 ancient artifacts, including golden sword hilts, Christian crosses, and jewels.

The total haul was worth $5.5 million.

And it made Mr. Higgins very rich.

It was dumb luck once again when a man came upon a torn painting at a flea market in Adamstown, Pennsylvania.

It featured a dismal country scene that was signed by a no-name artist.

But it wasn’t the painting that interested the man.

He just wanted to see if he could salvage the frame.

So he paid $4 for it, which turned out to be the bargain of the century.

Shortly after, while inspecting the painting at his home, he discovered something much more valuable hidden behind it.

A first printing of the Declaration of Independence.

Without question, each of these dumb-luck stories is incredible.

But this next one is even more amazing.

It might actually be the greatest dumb-luck story ever told.

Only this time, it could be you who is handed a massive windfall from it…

The Treasure Trove That Could Mint New Millionaires

A historic treasure trove has been discovered right here in the United States.

It is so big, it could crown 100 new millionaires every single month for the next 11 years.

And if you play your cards right, you could be one of them.

Because help is needed to get this treasure out of the ground.

And you may want to play a role in this story.

So let’s get right to it…

← Find Out: The Hottest New Trend in the $10 Billion Cannabis Industry
Which marijuana partner will beverage giant Diageo pick? Here Are 3 Top Candidates →