Just when it looked like the price of gold was going to retest its lows of October and maybe even September, the metal put on a bold rally.

After marking an intraday low of $1,196 on Tuesday, Nov. 13, gold prices took one more day to consolidate near those lows.

Since then, the price of gold has rallied and so far maintained a healthier level near $1,220. The run happened as stocks continue to struggle while the dollar retreats.

Meanwhile, historic extreme positions were recently set by both gold speculators and gold hedgers alike. And these tend to mark big turning points. 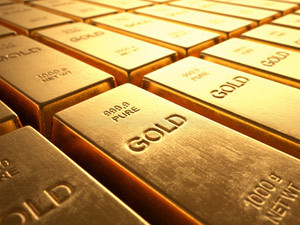 So with gold recently testing lows last seen at the start of 2017, sentiment has clearly been crushed.

But central banks have been buying aggressively, while gold-backed ETF holders have held steady.

I think most of the weak hands have now sold, setting the stage for an impressive rally over the next few months for gold prices.

Here’s How the Price of Gold Is Trending Now

The gold price started this past week with another bout of weakness as the dollar showed its muscle and consolidated high, with the DXY hovering above 97.5.

That pressured stocks and precious metals as investors and traders alike bought the dollar and treasuries for shelter.

Time Is Almost Up: The greatest economic catastrophe is about to blindside investors – find out everything you need to know to weather this market storm. Click here now…

But by midday on Wednesday, some of these positions reversed. Stocks continued lower, as it were until early Thursday. But the DXY finally backed off considerably, losing 50 basis points to test 97. Gold prices would decline steadily all day to close at $1,200. 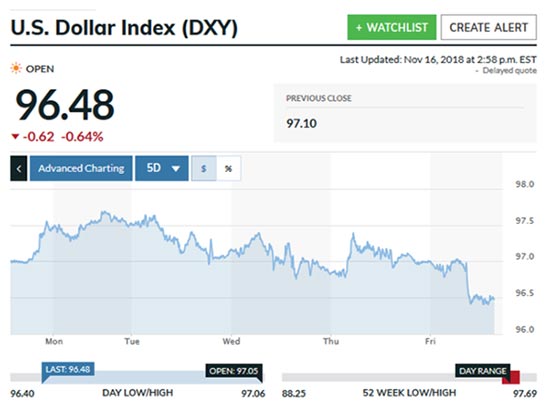 On Thursday, stocks put in an early low, then bounced back pretty strongly. Interestingly, the DXY also shot back above 97 where it spent most of the day. And yet neither of these were enough to dent gold, which consolidated around $1,213 most of the day where it finally closed.

Now that we’ve examined the forces behind the price of gold’s movement this week, here’s what’s next for the precious metal…

Here’s Where the Price of Gold Is Headed Now

Last week, I suggested the dollar could well be close to topping out.

While the DXY still remains near 16-month highs, its recent run could be running out of steam. 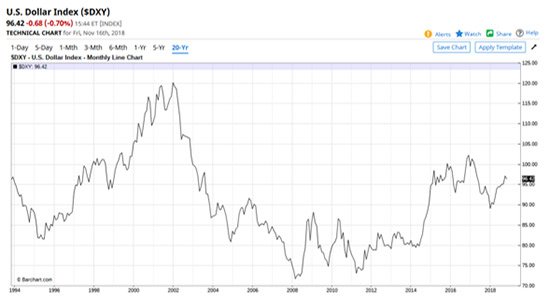 We are already more than 10 years since the DXY bottomed in April 2008. Dollar bulls and bears tend to last anywhere between seven and 10 years, so a renewed bear is a real possibility.

On a near-term technical basis, we’re starting to see some negative divergence. 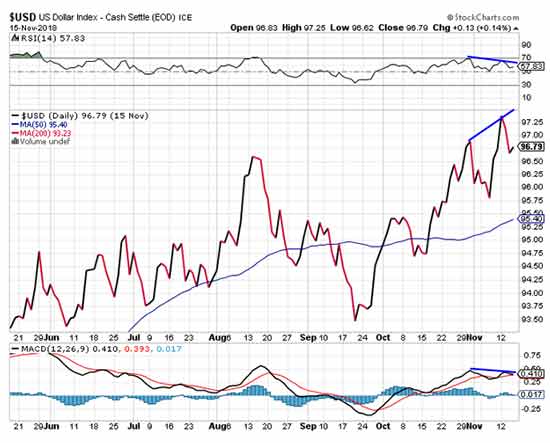 Despite the recent rise in the DXY, both the relative strength index and moving average convergence divergence momentum indicators have been trending downward. This suggests the DXY’s rise is losing momentum and could soon be headed south.

As for gold, it’s starting to act better. 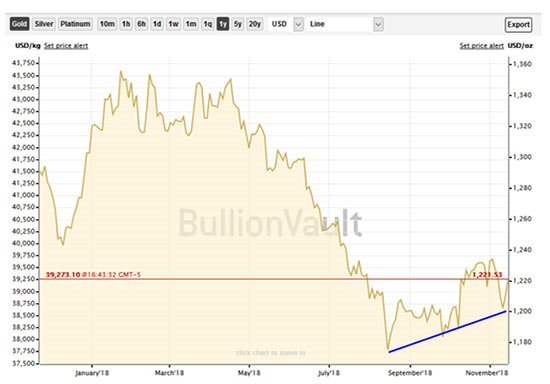 But its recent low near $1,200 lines up nicely to form a new higher low. And that has held above the rising trendline shown. 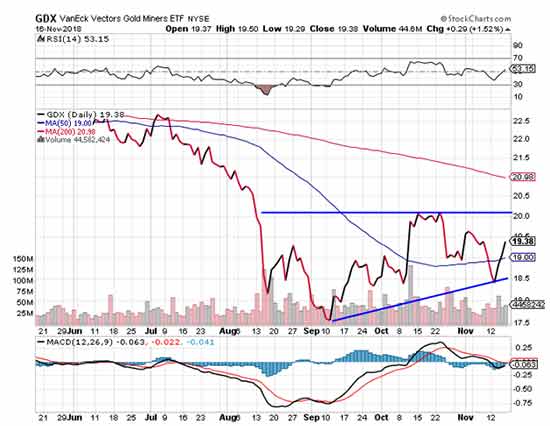 But the GDX will need to break above resistance around $20 in order to cement a new rally.

Consider that, according to Standard Chartered Bank, gold-backed ETF buying has seen 23 metric tons added in October and 13 metric tons so far in November. That’s made for net positive inflows for this year so far.

As well, central banks, especially in Eastern Europe and Asia, have stepped up their buying in a big way.

Couple that with recent extreme bearish gold speculators’ positioning, and we could have a recipe for a major rally. Those big short positions will need to be covered, and quickly, once gold rises significantly.

I think that could happen once the metal is solidly back above $1,240.

Millions of investors will lose everything as the average stock traded on Wall Street is poised to plunge by at least half.

But now, you could grow $1.5 million wealthier this year – even as the trouble plays out.

← How to Escape the 2018 Oil Crash – and Make a Killing in the Process
Can These 3 Pummeled Pot Stocks Recover? →