Yet another lackluster week for the price of silver has left the metal trading in a range near $14.15 per ounce.

Volatility is low, and that has kept sentiment in the toilet. It’s little wonder.

Whether up or down, traders have few opportunities to make money trading an asset that moves so little.

But volatility won’t stay low forever. This past year, silver volatility was nowhere to be found until June, when silver prices sold off and the action was nearly all downward.

Now silver is at levels close to its late 2015 lows. With the metal so badly oversold, I’d expect the bias to be mainly to the upside once volatility returns. And it will…

Here’s What This Week’s Silver Price Action Looks Like

Although silver’s range has remained pretty narrow lately, it has seen a little bit of action.

On Tuesday, Sept. 11, the price of silver dipped momentarily to $13.98 around 9 a.m. as strength returned to the dollar after a short dip. The U.S. Dollar Index (DXY) had retreated to below 95, then rallied anew to spend most of the day around 95.2. Despite that, silver prices too rallied back to close the day at $14.14. 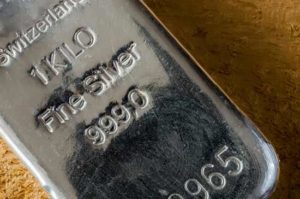 Further dollar weakness on Wednesday dragged the DXY back down to 94.85 by late morning, where it consolidated the rest of the day. That pushed silver higher to $14.26 by 1 p.m., then it retreated slightly into the close.

Here’s what the DXY did over the past five trading days: 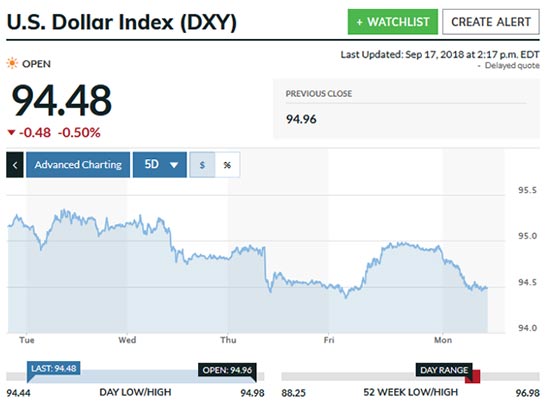 Although silver benefited from further dollar weakness on Thursday, a reversal on Friday sent the grey metal back down to end the week at $14.06.

But on Monday, trade war fears resumed with the DXY dialing back about 50 basis points to 94.50 from Friday’s high. U.S. President Donald Trump wants to proceed with tariffs on $200 billion of Chinese goods, and China appears unwilling to negotiate under duress.

That dented the dollar and allowed silver to rise on Monday to a midmorning peak of $14.23 before softening mildly to $14.17 by midafternoon.

Here’s Where the Price of Silver Is Headed Next

With fears of trade wars regularly front page news and an expected rate hike from the Fed later this month, it appears the dollar’s bias is to the downside. 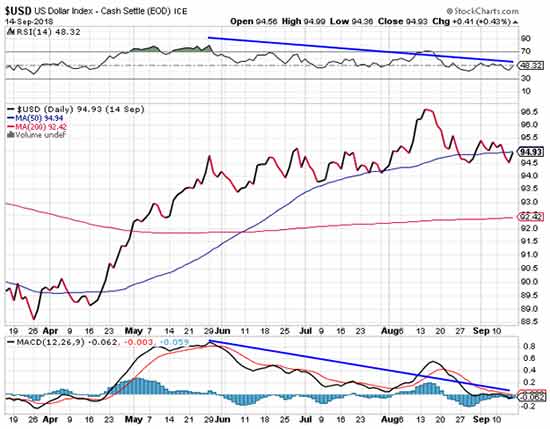 I’ve mentioned several times that President Trump wants a weaker dollar. He’s regularly vocal about his discontent with the Fed’s rate hiking policy. Even if the Fed keeps hiking, Trump’s displeasure and escalating trade wars are likely having some effect.

Though more gradual recently, the relative strength index and moving average convergence divergence continue on a long downward trend since late May.

Meanwhile, the 50-day moving average is flattening out, and I think the DXY is likely to trade near that level until the expected September Fed rate hike becomes a reality.

For now, traders are mostly buying the rumor, but I think they will soon switch to selling the news.

Silver continues to bounce around but seems to be forming a base just above $14. 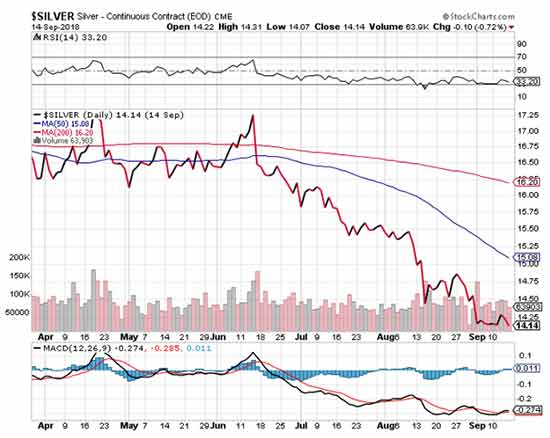 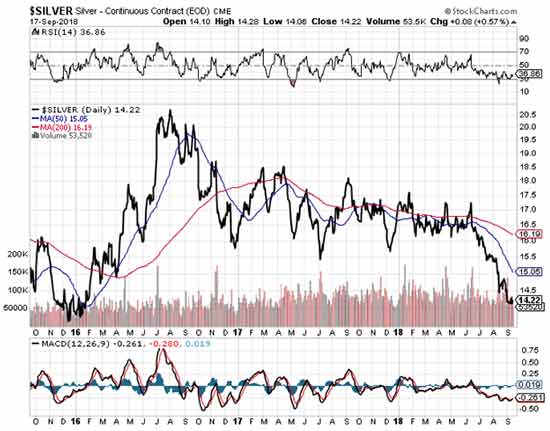 If silver’s forming a higher low, and if its price action looks anything like it did in early 2016, we could be in for quite the ride.

A recent report from Capital Economics said next year silver was likely to begin outperforming gold as both start to rally. With the gold-to-silver ratio above 84, silver should see more upside. The research firm is calling for a relatively modest silver gain to $17.50 by late 2019.

For now, if the Fed rate hike turns out to be the next catalyst, I think silver could retake $15.  Further strength would likely take it to $15.60.

And other forces, like a stock market correction, big dollar weakness or major short covering could lead to action similar to the first half of 2016. That would mean a more than 40% gain in just seven months. When volatility returns, that’s what it can do.