The biggest news in the price of silver this week has very little to do with the actual price.

In fact, silver has gone basically nowhere as it continues to consolidate around the $14.15 level in search of a catalyst.

What’s worth noting, however, is that the U.S. Mint has sold out its inventory of 2018 American Eagle Silver Bullion Coins.

August proved to be the strongest month since January 2017, with sales reaching 1.53 million units, up an impressive 72% over July levels.

Of course, this sort of demand has caused dealers to boost premiums all the way to 25% in some cases, as savvy buyers scooped up coins on two-year lows in silver prices.

So with silver prices low and possibly consolidating and the gold-to-silver ratio at levels not seen in 25 years, the metal has clearly become irresistible to some bargain hunters.

Here’s How the Price of Silver Is Moving This Week 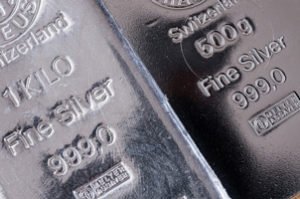 After big selling pressure pushed the silver price down two weeks ago from about the $14.50 level to $14.15, the grey metal has managed to hold above $14 while averaging $14.15.

Throughout the past week, it has had to contend with an obviously erratic U.S. dollar, whose index has ranged from 94.90 all the way to 95.70.

That’s a huge range over just five days – yet increasingly typical of what’s going on with currencies these days.

Here’s a view of the U.S. Dollar Index (DXY) over the past five trading days: 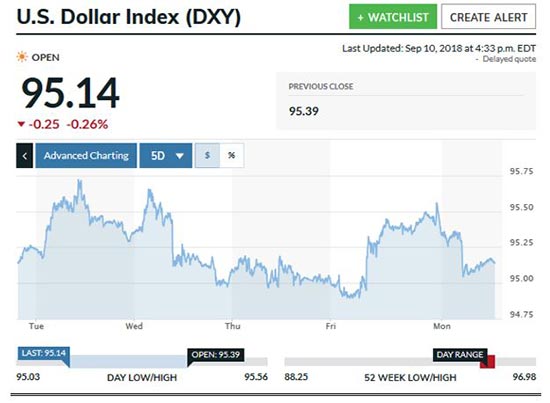 Here’s What to Expect from the Price of Silver Now

The dollar appears to be at a crossroads right now. 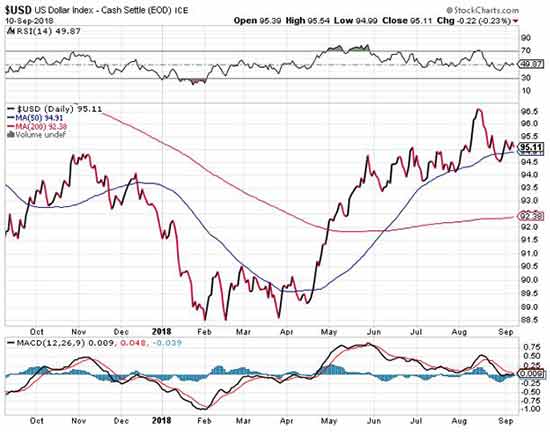 The setup is neutral to bearish in my view, as the DXY has managed to hold around the 50-day moving average lately.

We could see the DXY consolidate near 95 until the next likely U.S. Federal Reserve rate hike later this month. I think weakness is likely to return once that news gets baked in.

As for silver itself, the good news is it could be stabilizing at a level above the 2016 lows around $13.50, establishing at least a higher low in the process. 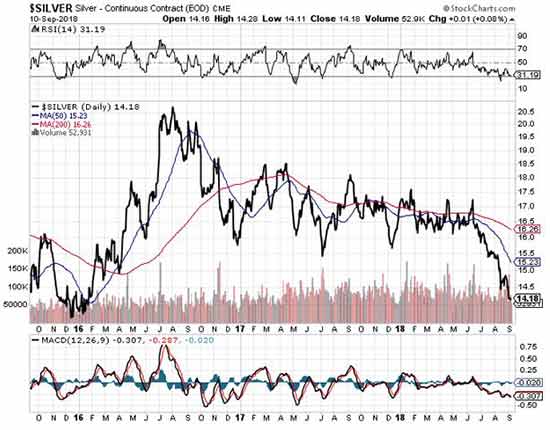 Zooming in to more recent action, we can see that silver is now trading far below both its 50-day and 200-day moving averages. 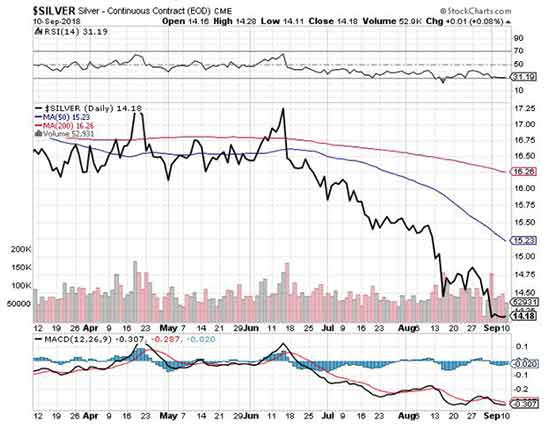 I think silver’s looking extremely oversold, certainly so from the perspective of the RSI and MACD momentum indicators.

Silver looks like it has strayed too far from the 50-day and especially its 200-day moving average.

Like the DXY, silver could be consolidating for the next couple of weeks until the rate hike becomes official. I believe that could be the catalyst for a weaker dollar and stronger silver.

Millions of investors will lose everything as the average stock traded on Wall Street is poised to plunge by at least half.

But now, you could grow $1.5 million wealthier this year – even as the trouble plays out.