Show me the gold market of the last few months, and I’ll show you an asset that has become almost universally despised.

Since April, gold has lost more than $140 per ounce, and is now trading near a major long-term support level.

Some of the world’s largest fund managers have given up on gold, having watched asset levels deteriorate by nearly 60%. After two years, even Wall Street analysts are downgrading major gold miners to “Hold” status.

Gold ETFs – on a global basis – have been unable to stem outflows for the past two months. Sentiment is so low that asset managers are establishing record net short positions in gold futures.

And, in what seems like a race to be the most pessimistic, some analysts are even calling for sub-$1,000 gold.

My experience tells me, when the average investor wants a 10-foot pole just to come near an asset, and when so many bears come out in force, we’re getting close to a bottom.

Taken individually, all the bad news items on gold suggest it’s an investment that’s headed lower or, at best, sideways for some time.

But as a whole, the negative macro view on gold provides for a great contrarian signal, suggesting gold may be nearly done falling.

Let’s examine in more detail each of the “bad news bears” I’ve mentioned above, and I think you’ll come to the same conclusion I have.

The Metal Is Officially in Correction Territory

Gold’s sell-off since mid-April has led to a drop of more than $142, pushing gold into a textbook correction. 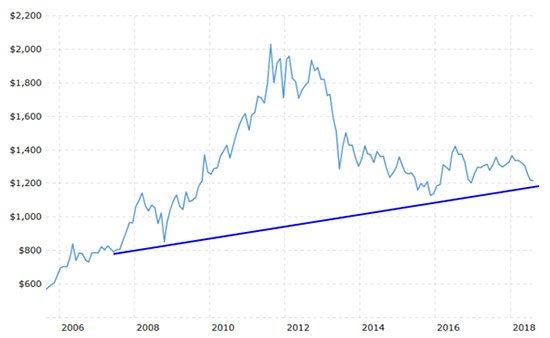 The long-term support line for gold over the last 10 years is shown in the above chart.

After the multi-year decline from $1,900 in 2011, gold still managed to stay above support when it finally ended its 4.5-year correction. Its December 2015 low of $1,050 managed to hold above the rising support line.

Today, it’s hovering below $1,200 – close to, but still above, key support. It would need to fall below around $1,180 and break down further to get into a dangerous technical price zone.

Negative Sentiment Has Reached an Extreme

Back in 2011, the Vanguard Precious Metals and Mining Fund (MUTF: VGPMX) held nearly $6 billion in assets. Today, the fund’s assets have fallen by almost two thirds through a combination of declining stock prices and redemptions.

So management has decided to rename it the Vanguard Global Capital Cycles Fund, restructure it, and broaden its mandate to include other sectors like telecom and utilities.

Essentially, Vanguard no longer believes in precious metals after seven years of challenging prices. This is a great contrarian sign, pointing to the fact that virtually everyone who wanted to sell has already sold. It’s a potential signal that negative sentiment has reached an extreme.

In 2001, Vanguard dropped the word ‘gold’ from its Vanguard Gold and Precious Metals Fund.

Another classic example: The latest blunder from research firm Jefferies.

Yet Jefferies waited two years and watched while Barrick’s share price got clobbered.

And now that Barrick’s market cap has been cut in half, Jefferies has finally come around and decided to downgrade the company.

After such a dismal performance from the world’s largest gold producer, wouldn’t it make sense to consider its shares more attractive, rather than less, and deserving a “Buy” rating instead?

As you can see, Wall Street is just following the crowds…

There Are Even More Contrarian Signals

Outflows from gold-backed ETFs have been considerable for the past three months.

In June alone they sold off over 50 tonnes in gold. That continued in July with another 39 tonnes of gold sold by ETFs.

Lower gold prices had a lot to do with that selling, as gold prices have fallen by nearly 12% since April. That has crushed sentiment to a point where, odds are, most of the gold selling has already taken place.

According to the World Gold Council, gold demand has remained soft to the point where H1 total demand is the weakest since 2009.

The latest COT report shows that large speculators and money managers are the most bearish they have been in decades.

Large speculators currently hold their second-lowest net long gold futures position in years.  Needless to say, they’re not very bullish. The last time they held a smaller net long position was in December 2015. It just so happens that’s when gold bottomed at $1,050 per ounce after 4.5 years of declining.

And money managers now hold their biggest net-short positions ever, larger even than when they last did in December 2015.

Speculative gold futures holdings, after falling for three weeks straight, are now at their lowest bullish stance since Jan. 5, 2016. That’s when a short squeeze rapidly forced shorts to cover, sending gold up $100 in just two weeks.

So all this negative action has some pundits calling for much lower gold prices.

Kosar is bearish on gold as he feels it’s stuck with downward momentum. Citing ETF outflows, he says they act as “trend fuel,” suggesting a lack of bullish conviction.

In that I agree, as ETF investors have been selling wholesale. But that’s looking in the rear-view mirror.

Still, Kosar thinks gold could test $1,100 or even break the $1,000 level before finally hitting bottom.

Now of course it’s impossible to know exactly what will come next, but that’s exactly the sort of dramatically bearish call that emerges near a bottom in sentiment.

Sentiment Is Negative – Perfect for This Gold Play

So looking at these factors as a group, it’s easy to see how sentiment has turned so massively negative.

That’s why it makes sense to dip your toe in the water now, and take at least a small position in this space.

To do this, I like the Gamco Global Gold, Natural Resources & Income Trust (NYSE: GGN). The fund invests in gold, silver, and energy-producing companies while being managed by the Gabelli family of mutual and closed-end funds.

And they’ve been doing a great job at it. GGN generates a consistent 11.8% yield at the current share price of $5.07. Owning GGN provides investors with precious metals exposure and a great yield while they wait for the next rally.

Remember, there are all kinds of reasons to be down on gold. And that’s exactly why its bottom could well be in.