The patience of gold bugs is being tested – and I mean severely tested.

You have to be a true yellow-metal diehard to put up with this kind of abuse.

Yet they say good things come to those who wait.

In late 2015, however, it bottomed at $1,050 and has been climbing on balance since. Gold stocks have done the same, bottoming shortly after, then rallying sharply. Despite their pullback from mid-2016, they’re up nearly 80%.

I’d argue they’re building up energy to spring much higher, as conditions continue to favor much loftier prices for the entire sector.

So let’s take a look at the current gold sector setup, as well as three up-and-coming gold producers that should perform handsomely in the next major rally.

This 10-Year Chart Tells Us Plenty

Let’s study a few relevant charts to see what could be in store for the gold sector.

First, here’s a look at gold itself with this 10-year chart. 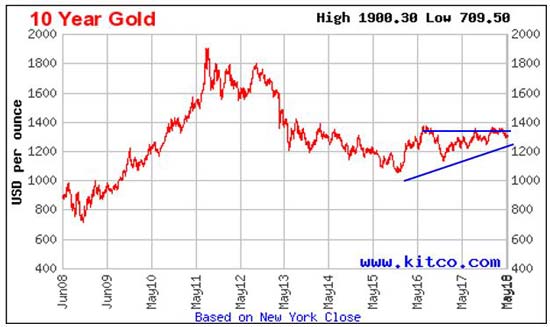 That should give sentiment a considerable boost, potentially carrying gold considerably higher still.

As for gold stocks, we also have the hallmarks of pressure building up. 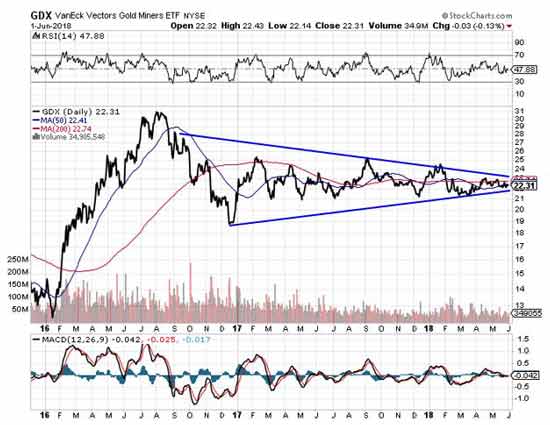 In this case, the wedge goes back nearly two years, and the average gold stock is trading in an ever-narrower price range. I think we’ll see the break come to the upside here, as well.

Finally, a look at the gold-to-gold-stocks ratio provides some interesting clues. 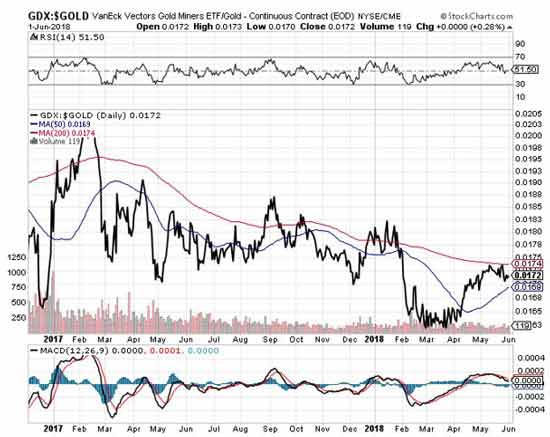 The ratio trended steadily downward, with gold stocks losing ground to gold from February of last year until this past March. That’s when the equities put in a bottom and have been gaining on gold for the past two months.

All of this indicates gold could be gearing up for a big move higher, and gold stocks may be presaging that move with some considerable upside leverage.

Next, let’s take a look at our three latest gold producer plays.

These Emerging Gold Producers Are Positioned to Profit

The first producer you should get to know is Leagold Mining Corp. (TSE: LMC), a $680 million, Vancouver, Canada-based, mid-tier gold producer focusing on Latin America. It has an impressive pipeline to more than triple its production to 700,000 ounces by 2020.

Its original asset is the Los Filos Mine, acquired from Goldcorp Inc. (NYSE: GG) in April 2017. Los Filos is both an open pit and underground mine in Mexico, expected to produce at least 215,000 gold ounces in 2018 at $875 to $925/ounce. An expansion project is underway at its Bermejal underground site, which should boost output to about 350,000 gold ounces annually at an all-in sustaining cost (AISC) of about $800 by 2020. Los Filos’ mine life is currently 10 years.

Leagold acquired Brio Gold last month, which should boost company-wide production to 400,000 gold ounces this year. Brio consisted of four assets in Brazil. The Riacho dos Machados open pit mine is expected to produce about 80,000 gold ounces at an AISC of $830 to $860/ounce this year, as well as an expansion plan that could boost output to 100,000 ounces/year.

As you can see, Leagold is a well-diversified gold producer, with solid growth in its future and strong expansion possibilities on the horizon.

Its flagship asset is the Chelopech Mine located in Bulgaria. Dundee has invested considerable sums to transform this mine into a modern underground operation that, in 2017, produced a record 198,000 gold ounces plus 36 million pounds of copper. The AISC to produce one gold ounce was just $696 in Q1 2018, providing nice profit margins. Besides boasting an eight and a half-year mine life, Chelopech drilling has demonstrated excellent potential to host additional resources.

Working in consort with Chelopech is Dundee’s Tsumeb copper smelter, located in Tsumeb, Namibia, which handles mainly copper output from Chelopech. Tsumeb is specialized and one of the few smelters in the world able to treat complex copper concentrates. The facility produces blister copper and sulphuric acid, which is vital to uranium and copper production. Tsumeb generated a positive free cash flow of $7 million in 2017.

Krumvograd, located in Southern Bulgaria, is Dundee’s near-term catalyst. Although it’s currently under construction, commissioning is planned for Q4 2018, and production should come in at 103,000 ounces annually for the first five years. That will boost the company’s gold production by 50%. The operation will be a high-grade open pit, and the project’s net present value is about $320 million, or 50% of the current market cap. Krumvograd also has some great exploration upside.

On top of all this, Dundee owns the Timok Gold Project in Serbia. Timok holds a resource of 1.72 million ounces and is at an advanced exploration stage. Additionally, Dundee owns 10.2% of Sabina Gold and Silver Corp. (TSE: SBB), with over 5 million ounces of gold, and has a joint venture project in a highly prospective area of Malartic, located in Quebec, Canada.

With established strong cash flow, low production costs, and a near-term boost in production, Dundee is poised to leverage gold prices in a big way.

The third and final producer worth considering is Premier Gold Mines Ltd. (TSE: PG). Premier is a gold producer as well as an exploration and development company. It has several gold projects in major mining districts, including Ontario, Canada; Nevada, U.S.A.; and Sonora, Mexico.

The Mercedes mine in Sonora, Mexico expects to produce about 80,000 gold ounces at an AISC of $820 to $870/ounce, and 40,000 meters of drilling are planned to delineate and explore the property and extend the mine life.

The Cove property in Nevada is currently 100% Premier Gold-owned, but Barrick has signed a joint venture of exploration to eventually earn 60%. A Preliminary Economic Assessment demonstrates robust economics, with a net present value of $143 million and after-tax internal rate of return of 48% with a four-year payback.

The Greenstone Property in Ontario, Canada is owned 50/50 with Centerra Gold Inc. (TSE: CG). Greenstone holds proven and probably mineral reserves of 4.65 million gold ounces and is being advanced with environmental assessments and impact studies already submitted to regulatory agencies. The mine is expected to produce 4.2 million gold ounces over a 14.5-year mine life, averaging about 300,000 ounces per year.

Beyond all this, Premier has several other exploration properties being advanced in both Ontario and Nevada, potentially providing for further production growth in the years ahead.

While we wait for gold to regain the attention of the investing world, these three growing miners are producing gold and, in turn, are set to leverage higher gold prices.

At our recent “Bitcoin 20X Summit,” we uncovered information that left many folks stunned – and reevaluating everything they thought they knew about the crypto market.

← A Blockchain ETF Is the Best Play for This $3.1 Trillion Market
Why the Price of Silver Is Down This Week and Where It’s Headed Next →