Often relegated to the status of “poor man’s gold,” silver is anything but that.

Silver is one of the seven metals of antiquity, which also include gold, copper, tin, lead, iron, and mercury.

Thanks to silver’s exceptional properties, such as the highest electrical conductivity, thermal conductivity, and reflectivity of any metal, it will always have significant industrial applications.

But silver shares many of gold’s properties as well, and for that reason, it has intrinsic value.

As global debt levels continue to swell to all-time records, silver is set to cement its place in history all over again.

And owning silver coins is a first-line defensive strategy everyone needs to arm themselves with.

Living Up to the Silver Standard

As far back as 4,000 years ago, ancient Greeks used silver ingots and coins in trade.

Few people realize that in past centuries, there existed not only a gold standard, but also a silver standard.

Stunning: New innovation will be like “adding twin turbos to the bitcoin engine” – and could send its price to $100,000. Learn more…

Romans referred to silver traders as “argentarius,” and the French still use the word “argent” (silver) to mean money.

By the 16th century, an international silver standard had developed which lasted until as late as 1935 in China and Hong Kong.

In the United States, a silver standard was established in 1785 based on the Spanish milled dollar. The 1792 Mint and Coinage Act made it law, and all U.S. currency had to be backed by silver.

But fiat money has since replaced precious metals, to nearly everyone’s detriment. History has shown us repeatedly that even monetary systems ebb and flow.

And given the advanced mammoth credit cycle we’re in, silver remains a top choice for investors.

Long List of Benefits and Super Undervalued: No Better Time to Buy

Silver is an ideal form of money because it’s a precious metal like gold and shares many of its benefits.

Silver is indestructible, has no counterparty risk, is a store of value, is private, can’t be hacked, and retains its value. In addition, the metal is fungible, in relatively limited supply, highly divisible, and universally recognized and desired.

One aspect where silver differs from gold is its value to weight ratio. Since silver is much cheaper than gold per ounce, it’s been easier to use for smaller transactions.

The gold to silver ratio is currently near 85, which is historically very high, suggesting silver is especially cheap compared to gold. In fact, the ratio is now higher than it was even during the 2008 financial crisis.

Given silver’s extreme undervalued status, it would be hard to find a better time to add silver coins to your financial arsenal.

So let’s take a look at my three favorites…

These are easily recognized by market participants virtually everywhere. They also have the benefit of standard size, silver content, and purity. And they also benefit from continuity, with the same coin having been in production for decades.

“Millionaire Maker”: A potential upgrade taking place behind the scenes could send the Bitcoin price to unprecedented highs. Few people even know about this game-changer. Click here to learn how you could make millions…

(SIDENOTE: Keep in mind that collectible [also known as numismatic] coins are a whole other market, often with sizeable premiums to the silver content. That means you could be paying a lot of money beyond the value of the silver. That doesn’t mean it’s not worthwhile – only that you really have to know what you’re doing. I don’t recommend collectible coins unless it’s to investors who are extremely well-versed in this market.)

The following are all equally good options, but it makes sense to buy coins that are either issued by your own government mint or are commonly available where you live. 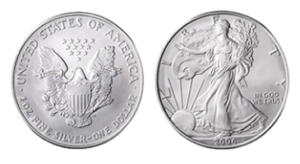 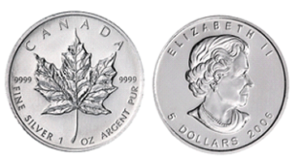 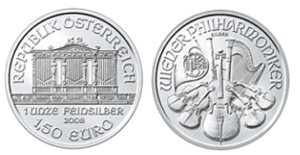 Before I finish, I’d like to look a bit into premiums.

Consider that premiums on silver currently run at about 16%. While this isn’t cheap, there are several reasons why. Given that the value of an ounce of silver is relatively low, the mint’s production costs are proportionately high. Government mints add a surcharge for production, seigniorage, and profit. Coin dealers will add their own fees associated with buying, selling, inventorying, and shipping.

Of course, supply and demand always factor into silver premiums as well. But consider that during the 2008 financial crisis, some dealers were selling silver coins at astronomical levels of 75% above spot price. So economics and geopolitics also have considerable influence on premiums. I suspect today’s levels around 16% will once again look like extreme bargains within the next few years.

Remember to always buy from a reputable dealer and look for competitive premiums. If you’re going to buy an “eternal asset” with major upside potential, you’re going to want the best. After all, you may own it for a long time.