Bitcoin price prediction charts use a lot of different criteria. But they typically have one common trait – they all forecast exponential gains.

Since the beginning of the year, I’ve seen more and more examples of a Bitcoin chart based on a property historically applied to commodities, such as gold and oil. 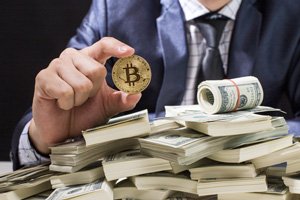 The pattern it illustrates fits well with the historical Bitcoin price data we have so far. And it implies extraordinary price increases over the next decade – to $3.2 million per bitcoin.

The property these charts are using is something called the stock-to-flow (STF) ratio. That may sound intimidating and complicated, but trust me, it’s a simple and straightforward concept.

The idea is that you take the existing stock of a commodity and divide it by the fresh supply that’s added every year (the flow).

So let’s use gold as an example. The “stock” of gold is quite high because nearly all of the gold ever mined – about 193,472 metric tons according to the World Gold Council – still exists and is held somewhere by some entity.

The “flow” is the amount of gold mined annually, which has averaged about 3,120 metric tons over the past decade.

The No.1 Crypto Tom’s Buying Right Now: Tom Gentile is predicting a massive price surge for a little-known cryptocurrency trading under $0.30. Click here to see his pick and exactly how to trade it.

Dividing the stock by the flow gives you a ratio of 62, which means it would take 62 years of gold mining to replace the existing stock. It’s by far the highest of all commodities; silver is a distant second with a stock-to-flow ratio of 22.

So what does all this have to do with the price of Bitcoin?

The Magic of a Predictably Shrinking Supply

Gold’s high stock-to-flow ratio tells us it’s stable – the existing stock is much, much higher than the annual supply.

But the flow number tells us something about why gold is valuable. A low annual supply reflects scarcity.

When you look at a stock-to-flow/value chart of several commodities, you can see that value follows an exponential regression: 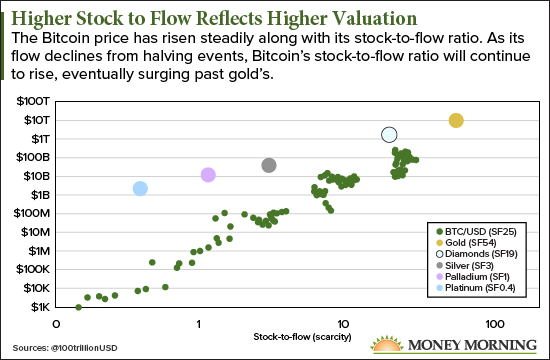 Notice that Bitcoin’s stock-to-flow ratio will double in 2020, bringing it almost in line with gold’s.

It also will push Bitcoin’s total valuation, sometimes referred to as its market cap, past $30 trillion. The corresponding Bitcoin price is the valuation divided by the number of bitcoins in existence.

The person who made this chart, who goes by “@100trillionUSD” on Twitter, used data from this chart and similar ones to generate a table showing Bitcoin’s historic and future stock-to-flow ratios and their impact on the Bitcoin price.

The numbers are staggering.

The reason for the jump was Bitcoin’s first “halving event” in 2012, when the mining reward was cut from 50 bitcoins per block to 25. These halvings occur approximately every four years and are baked into the Bitcoin protocol to control supply. Eventually, the supply of new bitcoins – the flow in our stock-to-flow model – will be cut to a trickle, with the last Bitcoin set to be mined in 2140.

In the first few years, that meant 2.625 million bitcoins were minted annually. But every halving cuts the annual supply in half. After the 2012 event, the annual supply was cut to 1.3125 million. By 2015, 75% of all the bitcoins that will ever exist had already been created.

But here’s where it gets really interesting. You may have noticed that each halving doubles Bitcoin’s stock-to-flow ratio, but increases the expected price by a factor of eight.

The next halving will occur in May 2020, putting Bitcoin’s STF ratio at 50 – approaching gold’s. And the projected price increases to $50,000.

That’s 400% higher than the current Bitcoin price. It probably greatly underestimates what will happen, as the price of Bitcoin has far overshot the projected price following the last two halvings.

The pop in price also tends to occur about one year after the halving event. So it dovetails nicely with my Bitcoin price prediction of $100,000 by the end of 2021.

But we don’t need to stop there. The halvings are scheduled to occur at regular, predictable intervals. Every four years, we’ll see an exponential increase…

How the Price of Bitcoin Can Get to $3.2 Million

We know there will be another halving in 2024. The Bitcoin protocol requires one after every 210,000 blocks.

That event will raise Bitcoin’s stock-to-flow ratio to 100 – far higher than any commodity in history. The projected price is $400,000, which one would expect in 2025 if the pattern holds true.

The next halving will occur in 2028, jolting the stock-to-flow ratio to 200. The Bitcoin price forecast at that point surges to $3.2 million based on a total valuation of $85.9 trillion.

But it does suggest that Bitcoin predictions of $1 million within the next decade aren’t so far-fetched.

To be sure, the halvings that follow the one in 2028 will result in vastly unrealistic price projections.

But it’s clear that the Bitcoin price still has a massive upside – not because of the stock-to-flow ratio, but because of catalysts such as rising participation from institutional investors and technical advances such as the Lightning Network that will increase Bitcoin’s speed and capacity.

When Neil Patel launched the Angels & Entrepreneurs Summit, he had only planned to invite a small group of guests to join him and guest “shark” Robert Herjavec… but then Neil revealed something truly shocking.

← This U.S. Cannabis Firm Could Be Next on the Nasdaq
1 Incredibly Cheap Pot Stock Worth Buying Now →