Cannabis stocks, which have largely been in a downtrend since the spring, had a particularly bad week. Most of the major stocks in the group suffered double-digit percentage losses in a week where the broader market returned nearly 1%.

The main culprit was…

the release of a terrible earnings report on Thursday morning, Nov. 14, from industry giant Canopy Growth (NYSE:CGC), which is often considered a bellwether for the cannabis sector. Moreover, a few of the other larger growers also released quarterly earnings last week — most notably, Aurora Cannabis on Thursday after the market closed — that added to the group’s torpedoing to varying degrees.

Amid the wreckage, one major cannabis player’s stock kept on taking its cue from the ’60s musical sensation The 5th Dimension by going up, up and away: Innovative Industrial Properties (NYSE:IIPR), a real estate investment trust (REIT).

So, just how bad were Canopy’s earnings? And just how well has Innovative Industrial stock been performing?

In the second quarter of fiscal 2020, Canopy posted revenue of $76.6 million Canadian dollars and a net loss of CA$374.6 million, or CA$1.08 per share. Both results fell far short of Wall Street’s consensus estimates, which were for revenue of CA$90.6 million and a net loss of CA$0.41 per share. So, it’s not surprising the market clobbered the stock, sending shares to a closing loss of 14.4% on Thursday.

To put that revenue result in perspective, it was down 15% from the first quarter, though, of course, it was up substantially year over year because the Canadian recreational market came on line in October of last year. The huge net loss was due in part to a CA$32.7 million restructuring charge for returns, return provisions, and pricing allowances primarily related to the company’s softgel and oil products. Additionally, it took an inventory charge of CA$15.9 million, resulting from excess stock of these products in the retail channel.

For a more complete look at Canopy’s results, you can read my colleague Keith Speights’ article here. 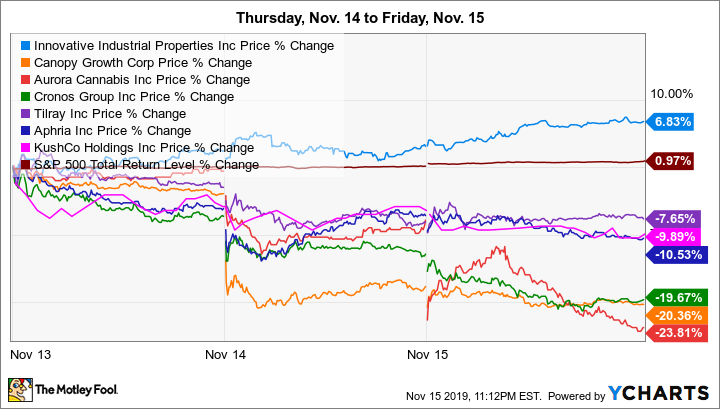 How well has Innovative Industrial Properties stock been performing?

While nearly all cannabis stocks took a beating on Thursday and Friday, Innovative Industrial Properties (IIP) not only held its ground, but gained 6.8%. The stock isn’t a mere two-day wonder, however, as it’s also a big winner over longer periods, as the chart below shows. (The stock began trading in December 2016, so two years is the longest possible whole-year period.) 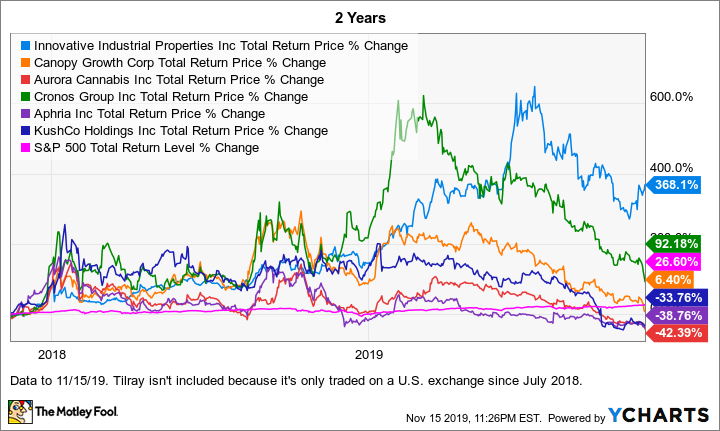 IIP, based in San Diego, buys properties in states where medical marijuana is legal and leases them to companies that use them primarily to grow and process cannabis. As of Nov. 6, it owned 41 properties located in 13 states, which were fully leased with an average remaining lease term of about 15.5 years.

In the third quarter, the company continued to grow like a, um, weed. Revenue…