You don’t need to be an environmentalist to see the investment opportunity renewable energy is becoming. It’s not just about clean energy either; it’s about costs and efficiency. Investors who realize this now will be set to reap huge rewards from solar stocks.

Companies that allow us to harness the energy of the sun, the wind, and the tides to generate electricity are at the forefront of this movement. And right now, solar power is cheap enough to compete with fossil fuel–based systems.

Don’t Sit This One Out! If you had invested in Apple after the 4G rollout, you could have made 56,465%. Now, 5G is going to create a new generation of millionaires, and you could be one of them. Click here now.

In fact, in many areas of the world, it has already achieved “grid parity” with fossil fuels. That means that cost is no longer a roadblock for solar power.

And it will only get better, too.

India is the third largest user of solar power, right after China and the United States, and it’s one of the fastest-growing economies in the world. It just cut its solar power generation and delivery costs by 27%. It is now the cheapest solar power producer in the world according to the International Renewable Energy Agency (IRENA). 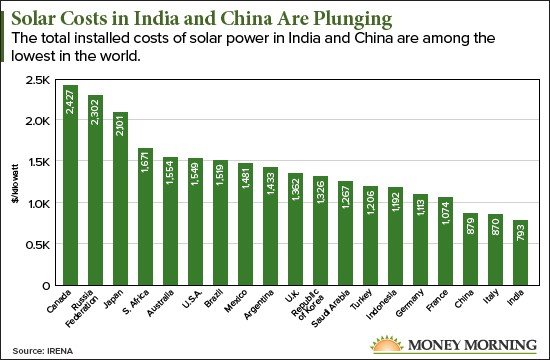 That’s a big deal. India is the sixth largest economy in the world and one of the fastest growing to boot, growing by 7% a year. The United States, in comparison, grows at just 2.8%.

But China isn’t far behind either.

Now two of the largest, fastest-growing economies in the world are also where solar power costs the least. That’s going to add up to a surge in solar demand in these countries as they continue to expand and other energy sources become more expensive, especially coal.

That’s creating a massive catalyst for the solar sector – and we’ve got the perfect solar stock to play it, too…

China and India Are Fueling a Solar Power Boom

While India is the cheapest solar market, China is the largest. In 2018, China installed 44.1 GW of capacity, according to its national energy agency. It reached a cumulative installed capacity of 174.63 GW.

With the air quality issues across big Chinese cities, it is no wonder it is pushing for a clean alternative. China is one of the largest carbon emitters in the world. In 2017, it actually increased emissions nearly three times as much as the United States decreased them. The U.S. was the top emissions reducer that year.

If China is to keep its economy and health on track, it must do something to change this trend. And considering how much solar capacity was added over the past two years, the country is doing it. Still, there is plenty more to go to satisfy this voracious energy consumer. Wood Mackenzie, a consultancy, predicts China’s solar production will grow by 700% by 2040.

India itself installed 7 GW last year and is expected to double that in 2019. Indeed, the government expects to build 100 GW of capacity by 2022, which would help it to reach one of its goals under the Paris climate agreement.

While air pollution is not as great a threat, delivering power to India’s vast and underserved rural areas is critical. There are hundreds of millions of Indian citizens now living off the grid. Cheap and abundant power must be delivered to its villages, and the government has also pledged to make rural electrification a top priority.

Solar energy, with its plunging costs and sustainability (no need to transport fuel to rural areas), is the perfect candidate to solve the problem.

And we’ve got the best solar stock to buy today to help you cash in as these countries transition to solar power.

This Is the Best Solar Stock Right Now

The top play on this lucrative market is JinkoSolar Holding Co. Ltd. (NYSE: JKS). It’s a Chinese solar panel maker, so it’s tapped right into China’s market, but it exports around the world too.

PV Magazine reported that JinkoSolar shipped 11.4 GW of modules in 2018. That’s 16% more than the year before. Revenue, however, dipped 3.38%, but that was due to falling solar prices. That’s good news though. Lower prices are what will drive sales in the future, and Jinko is poised to take full advantage of this trend. The company said that it expects to almost double its shipment growth this year.

You can see the benefit in its bottom line already. Despite revenue dipping, profits surged 193% in 2018.

In just over a decade, JinkoSolar has grown to become world’s third largest photovoltaic cell supplier by capacity. And the growth keeps coming. In its first quarter 2019 earnings conference call, the company reported that its gross margin came in at 16.6%, compared to the 13.8% (normalized) from the prior quarter.

The stock also trades at 14.88 times earnings, about 30% lower than the S&P 500 average. Even better, its price-to-book ratio is a dirt cheap 0.34. A ratio below 1 shows the company’s assets are worth more than the price of the stock. That won’t last long.

JinkoSolar is a top company in an industry that is changing the world, and its biggest customers will be two of the fastest-growing economies.

Mark My Words: If You Don’t Invest in “5G” Right Now, You’ll Regret It for the Rest of Your Life

Today, you have a rare chance to lock in a ground-floor opportunity from the biggest technology of the next decade.

But this could be 100 times bigger than all the previous generations combined.

And we have a list of recommendations that can make you a fortune. Go here.

← Where Will Aurora Cannabis Be in 5 Years?
3 Marijuana Stocks to Avoid in July →