The United States is the world’s top producer of natural gas, and it’s pumping out more now than ever before. In fact, the country is pumping out so much natural gas that it’s creating a problem.

But also an opportunity… 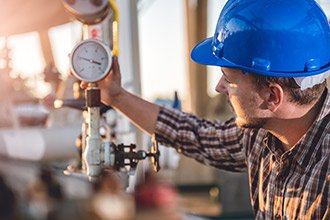 Producers can’t get their gas to users due to a lack of pipeline infrastructure. According to The Wall Street Journal, drillers in West Texas are even burning off excess natural gas because they don’t have any way to transport it.

The problem hits close to home, too. In the New York City area, utilities stopped accepting new natural gas customers because they simply don’t have enough gas to serve them.

Earlier this year, the Consolidated Edison Company of New York Inc. (NYSE: ED) announced a moratorium for new natural gas connections in most of its Westchester County service area. They created a waitlist for customers should capacity and demand equalize in the future.

Needless to say, this is an unacceptable condition for customers and utilities, alike.

There are two big reasons for the natural gas boom. The first being that, while not a renewable source of energy, natural gas is a much cleaner fuel than oil or coal. That means it’s being used for both home heating and cooking. And power plants are running on natural gas instead of coal now, too. The second reason is that there used to be no way for drillers to store gas. As technology has evolved, especially with fracking, the United States was able to produce more natural gas than it ever has.

THE ULTIMATE OIL PLAY: 548% in potential profits from a potentially endless stream of oil royalty checks designed to get bigger and bigger. Learn more…

That led to the country producing a record amount of natural gas, but the pipelines needed to deliver it are either too old, too small, or in the wrong places to service the population.

This Natural Gas Stock Is Set Up for Profit

Since reducing the need for energy is not a practical option at this time, the answer to this problem is to beef up America’s pipeline infrastructure. And the best play we see here is with Kinder Morgan Inc. (NYSE: KMI).

KMI is an energy infrastructure company that operates pipelines and terminals that transport natural gas, gasoline, crude oil, and other products. Its network is extensive as its 72,000 miles of pipelines span the United States from coast to coast and reach as far north as Canada. Plus, the company already transports an astounding 38% of America’s natural gas.

And the natural gas logjam is turning into a huge growth opportunity for Kinder.

The company’s proposed Permian Highway Pipeline Project is a timely initiative, specifically because of the lack of pipelines between the source at the Permian Basin and the Gulf Coast export facilities. It is a huge deposit of energy spanning over 86,000 square miles in West Texas and New Mexico and is a major driver in the U.S. energy boom. KMI’s project is expected to be carried out in 2020.

They could get a boost from Washington, too. Infrastructure remains a key buzzword in Congress and is one of the few sources of agreement between Democrats and Republicans. President Trump and Congress have been discussing a $2 trillion infrastructure package, which includes pipelines and energy transportation alongside roads and bridges.

And while the company is solving an urgent energy problem, there are plenty more reasons to own the stock.

For starters, the pipeline company grew its profits by nearly 800% between 2017 and 2018, bringing in a net income of $1.6 billion. The growth isn’t slowing down either. The quarterly earnings estimate for its expected July 17 report is $0.23 per share, which would be a year-over-year gain of 9.5%.

KMI also presents a technically beautiful chart with a solid rising trend since the market’s December low and a breakout to all-time highs. It is also crushing the S&P 500’s performance with a year-to-date gain of 37.7% versus the S&P 500’s 19.4%.

Toss in a beefy 4.7% dividend yield, and it becomes a total-return powerhouse.

Plus, the Money Morning Stock VQScore™ confirms this stock’s momentum with a healthy score of 3.75.

Oil could soon blast through its old high of $147 and soar to over $400 per barrel – and that means these five investments could multiply your money up to nine times over. Check out Dr. Kent Moors’ just-released Intelligence Report HERE…

← 3 Pot Stocks Short-Sellers Are Targeting
Why the Price of Gold Could Reach a Five-Year High of $1,500 →