With lists of more than 200 marijuana stocks to invest in floating around the Internet, finding the right marijuana penny stock to watch is difficult. But finding the right stock can double your money, just like when Canopy Growth Corp. (OTCMKTS: TWMJF) surged 140.09% over the last year.

We’ve done the hard work of combing through all available marijuana penny stocks to find one worth your attention, and we’ll reveal it in just a bit.

Now, it’s true most pot stocks are penny stocks, which are notorious for wild price swings. The volatility causes a lot of investors to buy high and sell low, which will always lose your hard-earned money. 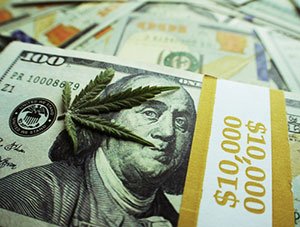 To be clear, you never want to invest what you can’t afford to lose.

However, for Money Morning readers who understand the risk, we found a potential 52% profit opportunity in the next 12 months.

This company I uncovered already has four dispensaries in Arizona, as well as plans for “10 U.S. dispensaries and four production facilities in four states.”

There is no such thing as a “safe penny stock,” but the fact that this company already has an established presence in Arizona and future expansion plans helps limit the risk.

And thanks to its Arizona dispensaries, sales of cannabis and cannabis concentrates in March reached $4 million for the first time in the company’s history.

But this stock has much bigger potential…

That’s because there’s a push to increase cannabis legalization throughout the Grand Canyon State. The Arizona Medical Marijuana Expansion Initiative could appear on Arizona’s Nov. 6, 2018, ballot, which would increase the number of qualifying patients to receive marijuana.

Arizonans aren’t stopping there, either.

The Arizona Marijuana Legalization Initiative – a proposal to fully legalize marijuana in the state – could also appear on the Nov. 6, 2018, ballot. That would legalize the possession, use, and consumption of marijuana for all persons 21 and older.

Full legalization in Arizona would be a major catalyst for the stock we’re about to show you. But this company isn’t limited to just Arizona. In fact, it’ll be tapping into legal marijuana markets even before November.

On top of its U.S. operations and expansion plans, we’re really excited about this company’s future production facility up north.

This cannabis firm is developing a 72,342-square-foot facility in Ontario, Canada.

We’re going to share just how much money the expansion to Canada could make the company in just a bit.

With full marijuana legalization scheduled for this summer in Canada, the new facility could be a gold mine, and shareholders could reap the rewards of owning this pot stock.

More sales will attract more investors, and the demand could send the pot stock price up 52% in the next 12 months, according to one analyst.

Again, never invest what you can’t afford to lose.

But if you want the opportunity for a double-digit return, this is the marijuana penny stock that could make it happen…

The marijuana penny stock to watch that could climb 52% in the next 12 months is MPX Bioceutical Corp. (OTCMKTS: MPXEF).

As we mentioned earlier, it operates four dispensaries in Arizona, and MPX just relocated the processing and production of its MPX concentrates to a new location, according to an April 9 GlobeNewswire report.

This new facility will double the current production capacity of MPX-branded products in Arizona to approximately 150,000 grams.

The final phase of the build-out at the facility, scheduled for the fourth quarter, will increase its annual capacity to 800,000 grams.

At current prices, that would be worth $18 million, according to GlobeNewswire.

But it gets even better in Canada…

The MPX Bioceutical facility we mentioned earlier could produce approximately 17,700 pounds per year of dried marijuana.

The price of one pound of marijuana from a Canadian dispensary is $1,850, according to cannabis information site Budzu.

The cultivation at this facility should start in the second half of Q2 2018, according to the company’s website.

Just in time for full legalization in Canada.

Now, MPX is traded on the Canadian stock exchange, and it opened this morning (April 10) at $0.72 per share. Wealth management firm Echelon Wealth Partners believes it could climb to $1.10 in the next 12 months.

For U.S. investors who don’t want to deal with the hassle of finding a broker to buy Canadian stocks, MPXEF traders on over-the-counter markets in the United States, too.

As MPX-CN climbs on Canadian exchanges, MPXEF should also climb.

But owning MPXEF is hardly the only way to profit from cannabis legalization.

We see a profit opportunity that could create life-changing gains…

Thanks to this historic legislation, tiny pot stocks trading for under $5 are getting set to double, triple, or quadruple.

In an exclusive interview with Money Morning, pot stock expert Michael Robinson shares all the good news – including details on five tiny weed stocks that could potentially turn a small stake into $100,000.