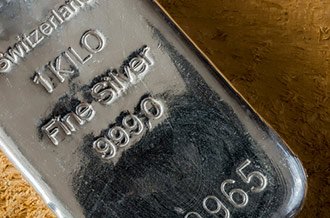 Since peaking just above $16 in late January, the price of silver has moved into consolidation mode.

In fact, in last week’s update, I told you not to be surprised about any pullback going forward.

So far it’s been a pretty mild correction in silver prices, which have dropped from a $16.07 peak to their current level near $15.65.

Still, the precious metal is up 12% since November and has held up well despite recent strength in the U.S. dollar.

That suggests both silver and the dollar are being bought as a safe haven against geopolitical uncertainty, anticipated inflation, or both.

The price of silver and the dollar tend to move in opposite directions, but there are exceptions. Here’s how similar situations have played out before – and what to expect next from silver prices in 2019…

Here’s Why the Price of Silver Is Consolidating This Week

The silver price spent the first part of last week in a weakness mode as the dollar climbed steadily.

A “Blueprint to Financial Freedom”: This guy used this secret to become a millionaire. Now he’s sharing it live on camera – and you could learn how to set up a series of $822… $1,190… $2,830 payouts every single week.

Meanwhile, the dollar continued to climb as investors and traders alike sought it out as a safe haven.

But Monday’s action in the DXY pulled the index back above 97, a level it hasn’t seen since late December. That did weigh on silver prices, but they managed to consolidate sideways with the metal closing at $15.68.

Now, here’s where I see the price of silver heading next…

With the dollar index back above 97, we need to be prepared for the possibility that it could maintain its range between 95 and 97.5, where it’s mostly been since October. 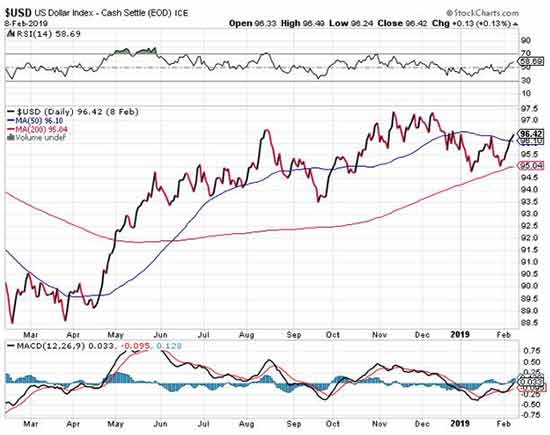 That’s exactly when the major stock indexes started to head south, which is no coincidence.

But that doesn’t mean silver has to be weak just because the dollar stays strong. It’s true they tend to move opposite each other, but that’s not always the case. 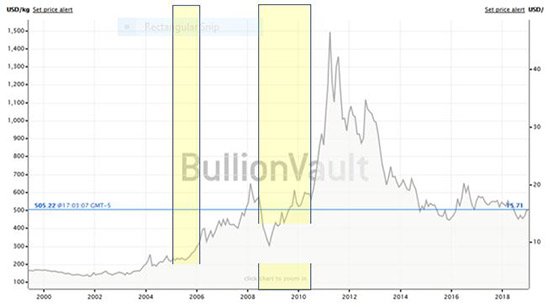 In the above chart, I’ve shown in yellow extended periods when the dollar rose. And yet silver gained 42% from the start of 2005 into early 2006.

But consider that in both instances, silver went on to rise much, much more as the dollar’s rally ended.

Since late last September, the DXY is up 3.5% while silver has gained 12%. So the point is we could be in one such period now, when both the dollar and silver rise simultaneously.

If we look at silver by itself, we see that it’s back at the same price as when we started 2018. 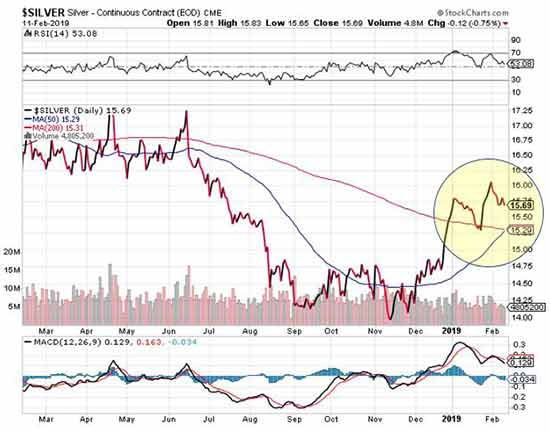 Even if silver moves sideways for a while, its 50-day moving average appears set to cross above its 200-day moving average. That “golden cross” won’t go unnoticed, and it could trigger some technical buying, possibly pushing silver higher, or at least providing some support.

Let’s have a look at my recent silver recommendations.

The SLV January 2021 calls with a strike price of $15 are off a slight 2.2% since recommended. Given their long term to expiration, they remain a buy on dips.

The 2x leveraged ProShares Ultra Silver ETF (NYSE: AGQ) has reversed slightly and is now up just 1%, so it too remains a buy on dips.

The Global X Silver Miners ETF (NYSE: SIL) has also backed off a bit but is still up 4.6% since I said to buy. SIL is a buy on dips.

Overall, silver appears to have entered consolidation mode, which I said to expect last week. Now we have to wait and watch to see just how long (or not) and how deep (or not) this correction ends up being.

Very soon, we’ll be releasing a very simple set of instructions to a selection of our readers.

Each person who follows these steps could be paid a total of $2,353 in only 28 seconds.