Bell-bottom pants and disco weren’t the only things to hate about the 1970s. In that difficult and turbulent decade, the United States was thoroughly bedeviled with a crippling economic condition known as “stagflation.”

It’s a weird (that’s the only word for it) and intractable combination of stagnating growth combined with inflation.

And unfortunately, unlike Richard Nixon, stagflation’s got a high likelihood of coming back.

If that sounds shocking, or maybe even unbelievable, I understand.

You see, before the stagflation of the 1970s, mainstream economists were actually convinced the condition was itself impossible. The academic consensus at the time was that inflation and growth were inseparable.

But as that decade proved, recession and inflation can absolutely happen concurrently. If you lived through the era, you’ll agree it’s no exaggeration to call it the worst of both worlds.

Of course, when you understand how it unfolded and devastated the U.S. economy in the 1970s, you’ll immediately see why it’ll likely recur soon.

Stagflation Was As Devastating As It Was Surprising

As I said, stagflation happens when we get a combination of stagnant economic growth together with high inflation. It’s an atypical state because inflation doesn’t normally occur when an economy is struggling.

It’s also a “central planner’s brew,” the result of money printing or expanding credit through monetary policies (creating inflation) while hindering growth, by either raising taxes or raising interest rates.

Between 1973 and 1982, the United States suffered three consecutive, punishing recessions. Inflation was rampant and running near record levels. Unemployment topped out at 9% before all was said and done.

YOU KNOW IT IN YOUR GUT: Look at how things are going. Financial turmoil is coming just around the corner, maybe just a few months away. Click here…

Key rates were so high they were virtually unthinkable by today’s easy standards. Long-term T-Bills yielded 15%, annual inflation was an oppressive 13%, and the Fed’s discount rate reached an ear-popping 20%.

What’s more, during the 1970s, the U.S. dollar was deliberately weakened in an effort to stimulate ever-elusive growth, while goods and services suffered supply limits, thanks to wage-price controls. These controls were part and parcel of the so-called “Nixon Shock” that saw, among other things, the dollar permanently disconnected from gold. It was the dawn of the free float, fiat currency regime that exists to this very day.

Growth was almost nowhere to be found, yet overall prices kept rising.

That sort of quandary makes leaders anxious for ways to kick-start growth. But there was little anybody could do.

That’s how persistent and destructive stagflation can be.

Why It Could Happen All Over Again… Soon

It’s no secret that the world is in the midst of a currency war – and has been for years now, as nations compete with each other in the devaluation stakes to boost exports.

It’s also no secret that the U.S. Administration wants a weaker dollar, which helps cheapen U.S. exports while encouraging Americans to “Buy American.”

But a cheaper dollar is a short-term fix.

Remember that 70% of the U.S. economy is based on consumption. The weaker greenback means Americans will gravitate toward buying U.S. products and services, but they won’t be cheap for long.

Why? Because U.S. manufacturers have to use their weaker currency to buy foreign-sourced inputs, many of which simply aren’t available in the United States since the decimation of its manufacturing capacity.

It’s a recipe for disaster.

Consider: Right now the Fed is intent on raising rates. But why?

Well, they’ve been too low for too long, for one thing. When the next recession hits – and it will – the Fed needs the ability to cut rates, and so it needs to raise them first.

The dilemma, meanwhile, is that inflation is still relatively low, though you can be sure that will change the tighter policy gets. And, despite the cheerleading you hear on cable news, so is economic growth.

Central bankers are tightening into weakness – weakness that, because it’s less weak than before, they’ve mistaken for real strength.

That’s a surefire way to cause the next recession.

So now we have overtightened, inflationary, growth-choking monetary policy and a recession, to boot. That’s stagflation.

But a true rerun of the utter misery of the 1970s wouldn’t be complete without rocketing unemployment.

Here’s how we get that, too…

This Would Be the Wrong Kind of “Upside Surprise”

Unemployment looks very low at 4% in June. In fact, it rose from 3.8% in May as more job seekers entered the labor force.

But, lest we forget, many unemployed are not even looking for work. The labor-force participation rate has actually dropped considerably, from 67% in 2000 to 63% today.

If more disaffected workers decide to enter the workforce, unemployment could very well surprise on the upside.

Meanwhile, the personal savings rate is near all-time lows at slightly above 3%, down by half from 6% in 2016. People are spending more on a net basis, in part because of higher prices due to inflation.

So now we have stagflation and high unemployment. Still, this 70s nostalgia act from Hell isn’t complete without fiscal meltdown, with all the ugly problems that entails.

That, too, is well within the realm of possibility.

The Government Is Spending Like It’s Going Out of Style

They’re only the latest in a long, long line of profligate spending going back nearly 20 years, but the Trump tax cuts have helped send U.S. government debt right off the charts at (a very conservative) $21 trillion.

Interest payments would crush the federal budget if rates rise significantly. Trump, perhaps forgetting his role in adding $2.3 trillion to the shortfall, tweeted as much on Friday morning when he said: 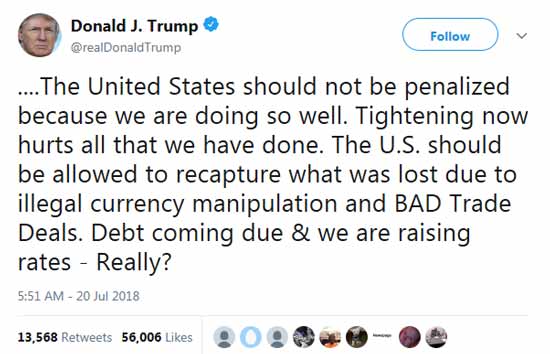 The Committee for a Responsible Federal Budget (CRFB) said in March that under their projections, “…rising debt and interest rates will lead the federal government to spend $6.8 trillion on interest costs over the next decade. If interest rates end up just 1 percentage point higher than projected, interest costs would increase by a further $2 trillion. If interest rates return to their pre-recession levels, costs could rise by $3.4 trillion. These added costs would increase debt to 107 or 112 percent of GDP under current law in 2028.

BLOOMBERG REPORT: “Trouble is brewing.” America could be headed for an economic disaster to rival the great depression. We believe some of the world’s richest players are preparing for disaster. Click here…

The CRFB believes, under their reasonable interest rate assumptions, that interest costs will quadruple over the next 10 years.

That’s simply unsustainable, with ugly implications for the lives of everyday Americans.

Worse, as interest payments gradually take up an ever-larger piece of the federal budget pie, proportionally less and less can be spent on items like critical infrastructure upgrades, government programs, or the safety net. Even the military could feel the pinch at the purse strings.

And with that, the recreation of the misery of the 1970s is complete: We have stagflation, high unemployment, and a government that robs Peter (the people) to pay Paul (the national debt).

Sadly, I don’t see how any of this is avoidable at this point. I’ve just shown you point by point.

But you don’t have to be helpless.

One of My Favorite Ways to Own Gold’s Protection

Judging by gold’s monumental, 1,400%-plus bull run during the stagflating 1970s, you’d most definitely want to hold some through any period of renewed stagflation.

There’s a new physically backed gold ETF that could be a great option. In this sector, the GraniteShares Gold Trust (NYSE Arca: BAR) operates on one of the lowest management expense ratios out there, at just 0.20%, compared to others at 0.40% or more.

The trust’s goal is to seek the performance of the price of gold (minus trust expenses).

BAR is physically backed by gold held in London, England, with ICBC Standard Bank acting as custodian and BNY Mellon as trustee. In operation since only Aug. 31, 2017, BAR already has over $250 million in assets and counting.

The stage is set: the Fed and the government are practically intent on pushing this thing over the edge. Stagflation – perhaps even a repeat of all the grief of the 1970s – is a matter of “when,” not “if.” Holding gold while it replicates its quadruple-digit gaining performance is your smartest move.

You may only have a few months to prepare. A market signal that showed up before the Great Depression… before the dot-com crash… and before the 2008 financial crisis has just appeared again. Each time this signal appears, investors only have a few short months before chaos strikes. So if you want to protect yourself and your family, there is no place for fear, panic, or mistakes. You must act now. Click here to discover how.

← There’s “No Doubt” THIS HUGE COMPANY Will Enter the Marijuana Industry
The Price of Bitcoin Is Closing In on $8,000 →