Somewhat surprisingly, Aurora Cannabis (NYSE:ACB) seems to be the center of attention for many cannabis investors. It’s the most popular pot stock on the Robinhood trading platform. Aurora’s average trading volume has been much higher than its rivals in recent weeks…

Some investors reacted enthusiastically to Aurora’s major rebound last week and early this week. However, it was easy to tell that the good times wouldn’t keep rolling for long. Sure enough, Aurora’s share price fell dramatically over the last couple of days.

It’s important to understand that even if Aurora had kept its big recent gains, it would still badly underperform Curaleaf. The stock charts of these two cannabis companies have shown diverging paths throughout much of this year. 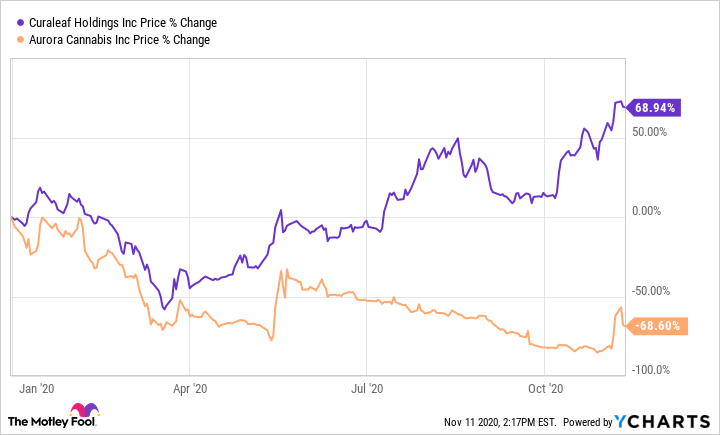 Aurora and Curaleaf started out 2020 with market caps of close to $3 billion, with Aurora a little under that level and Curaleaf a little over it. Now, Curaleaf’s market cap is more than four times greater than Aurora’s.

Curaleaf has absolutely clobbered Aurora when it comes to stock performance for a simple reason: Its business is booming while Aurora’s isn’t. Just look at the two companies’ most recent quarterly results.

Curaleaf reported managed revenue of $121.4 million in the second quarter of 2020. This reflected a year-over-year increase of 120% and a quarter-over-quarter gain of 16%. The company estimated that its sales would have been $25.6 million higher without the negative impact of the COVID-19 pandemic, which hurt sales in Massachusetts and Nevada especially.

Meanwhile, Aurora posted fiscal 2021 Q1 revenue of 67.8 million in Canadian dollars (roughly US$52 million). Although this total came in a little higher than expected, it still represented a year-over-year decline of 10% and a sequential increase of only 0.4%.

Curaleaf continues to gain share in the fast-growing U.S. cannabis market. Aurora is losing share in the Canadian recreational marijuana market, where the company makes more than half its total revenue.

3. No contest in the battle of bottom lines

An even starker contrast can be found on the two companies’ bottom lines. Neither is…

← Is Aphria Stock a Buy?
7 Cannabis Stocks That Will Benefit From The Results Of The U.S. Election →