I’ll put it down here in black and white, for every single reader to see and take note of: Marijuana will be legal, on the federal level, in the United States. Most likely by the next presidential election.

I’m going to go a step further and say, here and now, that it’ll be U.S. President Donald Trump who pulls the trigger, and not the Democrats who introduced the idea. While that may strike you as controversial, it would be the smart move.

I think it’ll also be the “last piece of the puzzle,” a move that unlocks uncountable billions in profit potential for investors who heed my prediction and get in place now.

I have to be blunt here: It’s ridiculous to keep cannabis on as a Schedule I controlled substance. It’s just not of the same destructive caliber as heroin or cocaine.

I’m not a doctor. I’m not a scientist. But I do have a functioning set of eyes and ears connected to a brain. My purely anecdotal observation, shared by just about everyone else I’ve ever met or heard of… is that marijuana’s on a par with booze; even less dangerous, in fact, with fewer side effects and ills.

I’m not alone, although I don’t know of too many other people who believe it will be Trump who makes the final push to legalization.

Americans overwhelmingly support legal cannabis; reliable opinion polls routinely peg that support far north of 60%. And Trump could bring some of those Democrats who maybe can’t stomach a Green New Deal back into his camp come election time.

In investing, we have to be politically agnostic and consider what’s best for our money.

It doesn’t matter if you love Donald Trump or think he is the worst thing to ever happen to the United States of America. He has demonstrably outplayed most of his rivals most of the time since announcing his run in 2015. He knows how to get the vote he needs, and adding tens of thousands of cannabis voters to his tally could take him a fair bit of the way back to the White House in 2020.

Cannabis reform is actually one of the few remaining bright spots of bipartisan consensus in an otherwise ultra-polarized, antagonistic, “gotcha!” political culture. Bills targeting reform are routinely put forward and co-sponsored by Democrats and Republicans – as opposed to the “usual” Democrats or Republicans.

It was Republicans who led the charge to add hemp, cannabis’ (mostly) non-psychoactive “cousin” – to the 2018 Farm Bill. Overnight, that reform created a massive new market for CBD products. That niche is worth about $2 billion as I write this; some estimates have that doubling inside two years.

Mitch McConnel signed the bill and commented, “I used my very own hemp pen to sign the conference report, clearing the way for the House and Senate to pass legislation and send it to the president’s desk. I’m proud that the bill includes my provision to legalize the production of industrial hemp. It’s a victory for farmers and consumers throughout our country.”

On this, no Democrat could disagree.

At the end of the day, the purse strings say we don’t really have a choice on legalizing cannabis.

The Cannabis Goodie Bag Is Too Rich to Ignore

State and local governments from sea to shining sea, faced with crumbling infrastructure, swelling populations, pension crises – all kinds of problems – need the possible tax revenue that can come from legal marijuana.

States that have legalized pot have seen tens and even hundreds of millions of dollars pour into their coffers. California took in $350 million in taxes during its first full year of total legalization. That fell short of estimates, but it’s early yet, and $350 million is $350 million.

Once it is legal federally, prices will fall to the point that the current black market for pot will collapse and disappear, which would almost certainly erode the criminal element. Revenue will explode, as it has in California and Colorado, and so will the tax dollars collected on each and every bud, joint, vape pen, and THC-laden gummy treat and brownie sold.

Marijuana’s Moral Quandary Has Been Been Settled

Turns out, we can’t: States have been balancing their budgets on cigarette and alcohol excise taxes and lottery revenue for decades now.

I know that weed has a bad reputation, but once it’s legal, it will be vastly easier to regulate. There won’t be any dramatic rise in teenage marijuana usage. We haven’t seen that happen in the legal states. If anything, teen usage may decline.

If you think I’m out of my tree here, try this little test: Give your teenager $100. Tell them to come back in an hour with $100 worth of weed or bourbon. Odds are, they won’t be bringing back three bottles of Knob Creek.

My point is this: The local authorities have by and large done an outstanding job of making it too hard for kids to buy booze – especially when anyone helping them do it has committed a crime.

We have every reason to expect legal pot to be about the same. We will never stop teenagers from drinking beer and smoking pot, but legalizing weed will make it a little harder to get for kids.

I have no illusions that recreational marijuana will be super healthy. Neither are cheeseburgers, cigars, or beer. I was just on a cruise ship where those three products were consumed in massive quantities, and no one blinked an eye. Health foods, they ain’t… but they’re legal, tasty, and delicious, and no one cared.

I suspect pot will be the same.

There is not going to be a great crime wave for legalizing pot. Again, that hasn’t materialized in legal states anywhere. Most of the crime associated with marijuana use is related to dealing with what is a Schedule I substance, smuggling it in quantity.

Using the ill-fated example of alcohol prohibition of the 1920s as our guide, we can expect criminal activity to begin to dry up once cannabis is legal at the federal level. Al Capone got out of the booze business when Prohibition ended – and he took his Tommy guns with him. Again, states looking to save money can pardon all the non-violent weed offenders and save millions in prison spending. That’s something that’s currently underway in Canada; I’m watching with extreme interest.

But that’s not all I’m watching with extreme interest. After all, we’re here to make money. Serious money.

Not just in pot stocks, either – though the $12 billion investors and entrepreneurs made in cannabis in 2018 is certainly a good start.

I’m talking about opportunities in marijuana and related segments that Wall Street hasn’t even dreamed of yet. To give you an idea of the potential here, it’s not inconceivable that, someday before long, you’ll be able to fund a good chunk – if not all – of your retirement income using marijuana investments.

I want you to watch this interview with me and Greg Miller from the cannabis conference last month. I put it all out there. No one’s going to want to miss out on this interview… unless you’re the guy I always see behind the 7-11 slinging dime bags. On second thought, he’ll need another line of income before too much longer. 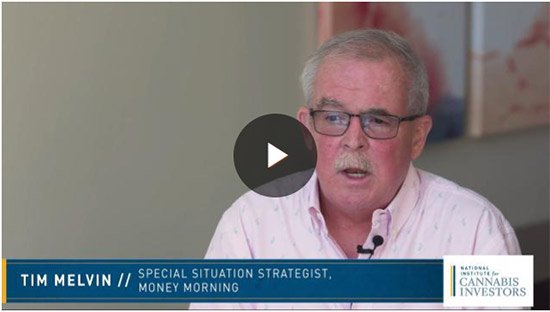 We just held a live event with former Speaker of the House John Boehner and the most powerful people in the cannabis world for one important reason… to help you make a fortune from America’s most controversial, misunderstood, and lucrative industry. If you missed seeing this historic event LIVE – and John Boehner’s SHOCKING prediction – click here for a special rebroadcast.