Gold has been a store of value and wealth for more than 5,000 years, dating back to ancient Egypt. And here in America, the value of the U.S. dollar was fixed to gold in 1792, when Congress passed the Mint and Coinage Act. That would last until we went off the gold standard in the 1970s.

Yet through it all, the yellow metal maintained its aura. Even though no major currency is tied directly to gold anymore, central banks around the world still maintain a cache in order to defend their currencies. Its utility as a hedge against economic trouble is unparalleled.

The benefits of owning gold are made crystal clear by the crisis in Venezuela.

If you lived in Venezuela and owned gold, you would be one of the few citizens there who made the right financial move. Annualized inflation is estimated to be between 80,000% and 100,000%. Even the International Monetary Fund (IMF) suggested it would be closer to 1,000,000%. Compare that with the annual U.S. inflation rate at 1.9%.

Prospering During a Financial Crisis: Incredible wealth-building opportunity for those who are prepared – quickly amass a potential $1.5 million retirement nest egg. Learn more…

In other words, hyperinflation destroyed their currency. With inflation levels that high, fiat money became worthless. And when the economy collapsed, what scarce resources were left were too expensive for the average person to buy.

But if you owned gold, it held its value, and it could’ve been your lifeline out of the crisis…

How Owning Gold Could Save You

Gold has been a quiet portion of a well-balanced portfolio for decades. It aids your portfolio’s performance when times are good and helps keep it stable when conditions are not so good. It makes sense for anyone to have a reasonable portion of your money – something around 2% – in gold. 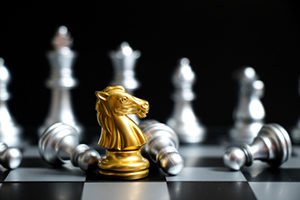 Contrary to popular opinion, gold isn’t a pure hedge against inflation. Instead, there’s a direct link between gold and interest rates, which are, in turn, driven by inflationary pressures and global risk, especially lately.

That also means you can avoid the worst of the fallout as the Fed continues to threaten stock gains with its headstrong move toward higher interest rates.

And while stocks have made a nice recovery since their lows, gold also rallied to nine-month highs. Win-win.

However, just owning gold is not enough when crisis hits. You have to be able to access your gold.

The Maduro government was smart enough to stockpile gold before they destroyed their economy, but now they can’t get to it. Their gold is held at the Bank of England, and the British government isn’t about to let them have it. It does the regime no good at all if it just sits in a vault.

While that might be poetic justice for the tyrannical regime, you don’t want to find yourself in a similar position when you need gold. Investors need to be able to access their gold for it be useful in times of uncertainty – and especially if a crisis unfolds.

Here are the three best ways to do it…

The 3 Best Ways to Own Gold

Gold is a scarce asset, and it cannot be created out of thin air the way a paper currency can. It is priced in dollars, so any event that pushes the value of those dollars lower must, by definition, push the price of gold higher. That’s why it maintains worth, unlike a bank account or a paper asset.

It is important for investors to own gold in some form, but actual, real, physical gold is the best way. Even gold certificates and futures contracts are mere promises that someone will give you the value of the gold. While in normal times, that would be good enough, should a crisis hit and the financial system locks up, those paper promises would only be worth the paper itself.

We’ve all seen the ads on television with a highly paid celebrity extolling gold’s virtue. While they’re probably charging you an arm and a leg to buy it from their company, it’s easy to buy and sell real gold. It doesn’t matter whether you open an account with a gold dealer, the U.S. Mint, or simply head down to the local gold and jewelry shop at the strip mall.

You can buy one-ounce gold coins, such as the American Eagle, Canadian Maple Leaf, South African Krugerrand and many others. You can even buy small coins in one-tenth ounce, one-quarter ounce, and one-half ounce sizes if you don’t want to buy in $1,322 increments – the current price of an ounce of gold.

If you feel more comfortable with buying and selling on the stock exchange, exchange-traded funds are a good alternative, too. SPDR Gold Shares ETF (NYSEArca: GLD) is an ETF that tracks the price of gold.

It’s highly liquid, but while the fund owns real gold, you cannot take delivery of that gold. However, you can still cash it in any time you want to get the benefit of the increase in its price. This is for people who want the benefits of owning gold without wanting to worry about keeping it secure in their homes.

If you want a hybrid between real gold and a traded gold fund, Fitz-Gerald likes the Merk Gold Trust ETF (NYSEArca: OUNZ). It is one of a small handful of gold ETFs that allows investors the opportunity to turn in their shares for the delivery of actual physical gold bullion, like bars and coins.

Any way you want to do it, dedicating a small portion of your portfolio to gold in some form will protect you from, as the gold broker pitchman put it, the “financial craziness” of today’s world.

The takeaway is that gold is an important hedge against crises, and that while we aren’t predicting that the United States will turn into Venezuela, another financial crisis like we saw in 2008 could threaten your personal wealth.