In last month’s update, I said I wouldn’t be surprised to see the gold price at $1,500 before the year is up. And it only took three weeks to get there.

Now, while there’s potential for corrections along the way, I have reason to believe the price of gold is aimed at $1,600. 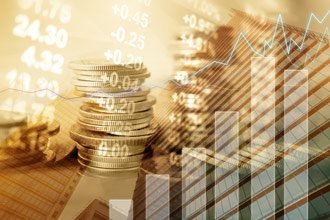 Last Wednesday, the bond market fired the dreaded “recession trigger” salvo so many have been watching for.

That doesn’t mean a recession is imminent, but it has become much more likely within the next 12-18 months.

The markets freaked out. The S&P 500, the Dow Jones, and the Nasdaq each lost 3% that day alone.

Now the market is pricing in a 100% probability for another 25 basis-point Fed rate cut in September.

You Have to See This to Believe It: America’s favorite “Shark” debuts the Angels & Entrepreneurs Summit. Watch now…

And this has all been great for the price of gold. In just the past month, the yellow metal is up a sharp $100 per ounce, or 7%, trading near a six-year high.

Gold could be due for a rest – or even a decent correction – before it continues to climb.

But by all accounts, it appears the precious metal’s got plenty left in its tank to power higher, as major central banks lean increasingly toward easy money policies while acquiring gold.

And that’s not the only thing pushing gold prices up.

Everything Behind the Gold Price

But I expect gold to power much, much higher in the months and years ahead, with all the drivers pushing it upward.

In fact, it would not surprise me to see gold trade up to $1,600 before this year is out. But the most recent Commitments of Traders (COT) report showed commercial (smart money) gold traders were short 324,000 contracts, the second highest level in the past 20 years.

That’s a big contrarian indicator that gold could correct before it marches higher. I’m not saying that has to happen, only that the there are decent odds.

Meanwhile, if you want to know what’s been driving gold prices, you don’t need to look very far.

Sovereign bonds providing negative yields have reached a total $16 trillion. A few months ago, the level was $13 trillion, and just last month, it was closing in on $15 trillion.

And if you look at real yields (net of inflation), then the total is actually closer to an astounding $30 trillion. 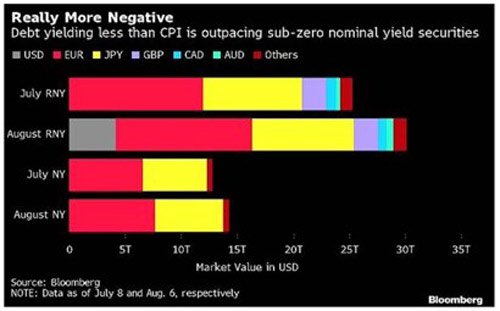 Now have a look over the past year at how gold’s been performing versus the 10-year Treasury yield.

Pervasive worries about ongoing trade wars, slowing economies, and even looming recession have central banks tripping over each other to ease the first and the most.

As you can see in the chart below, since yields peaked in November, it’s been a near-perfect inverse correlation with gold, which helps explain why gold’s been soaring. 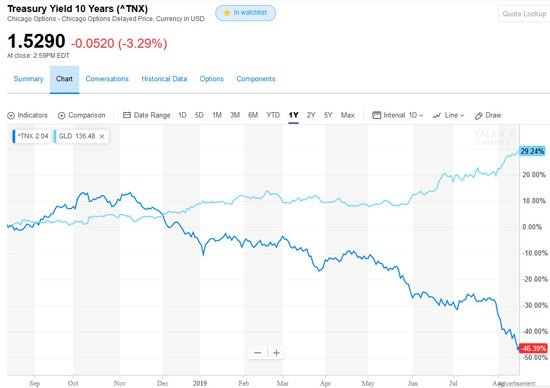 And speaking of soaring gold, here’s a look at what it’s been doing in major currencies across the globe. 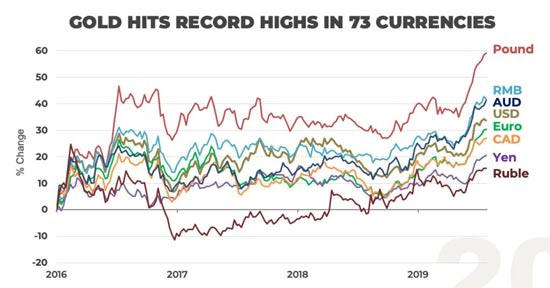 The Gold Price and Your Dollar

Given that the Fed cut rates in July and almost certainly will again in September, the U.S. dollar has been surprisingly strong.

In fact, it appears to be in a rising trend channel since May last year. 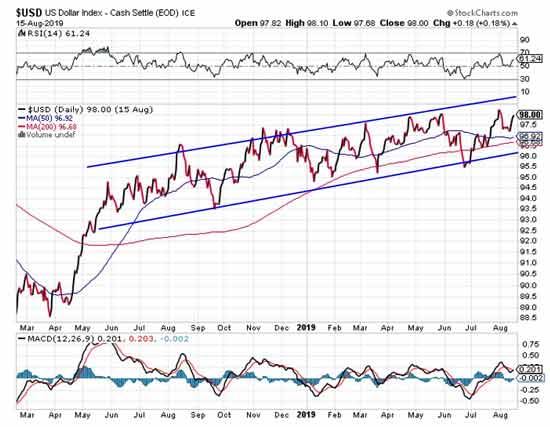 With the Fed’s recent and expected rate cutting and the drop in longer-term rates, it appears counterintuitive that the dollar would be rising. But when you consider the difference in rates between the U.S. dollar and other major currencies – many with negative-yielding bonds – it’s easier to see the dollar as the best of a bad bunch.

Maybe, when the dollar gets its turn and Trump gets his wish, and the dollar starts to tank against other currencies, gold will power further as a result.

Remember, gold at $1,500 is well below its all-time high of $1,900. But that’s just in USD. Much of the rest of the world, operating in other currencies, has been seeing gold establish new all-time highs of late. 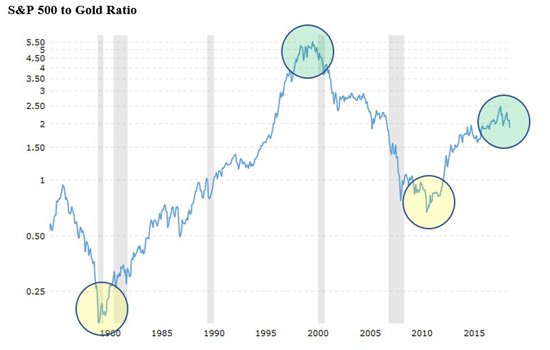 This chart compares the value of the S&P 500 to the price of gold in U.S. dollars. Gold’s ultimate secular bull run peaked in 1980, around the time this ratio bottomed. A similar bottom happened in 2011.

Now it’s looking like stocks may have peaked last fall, relative to gold, like they did in 2000. In fact, stocks can still move higher, but if gold gains faster on a relative basis, then we may be headed towards another ratio low. And that could mean dramatically higher gold prices.

In the near term, however, a correction in gold and gold stocks should not come as a surprise.

Here’s an approach you can take with that in mind…

What This Could Mean for Gold Stocks

Despite gold moving higher, gold stocks have backed off.

Also, the relative strength index (RSI) momentum indicator has been trending downward since late June, even as the VanEck Gold Miners ETF (NYSE: GDX), in the chart below, was powering higher. This negative divergence suggests gold stocks may be unable to sustain their recent rally. 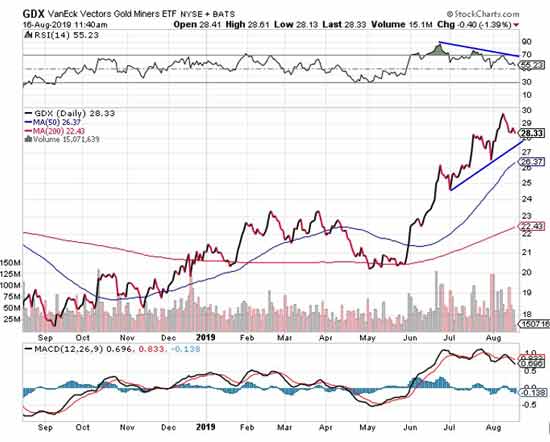 Looking at gold stocks versus gold reinforces that view.

In this next chart, the RSI and moving average convergence divergence (MACD) momentum indicators are suggesting that gold stocks may continue to lose ground versus gold in the near term. And this in itself suggests gold could be headed toward a correction. 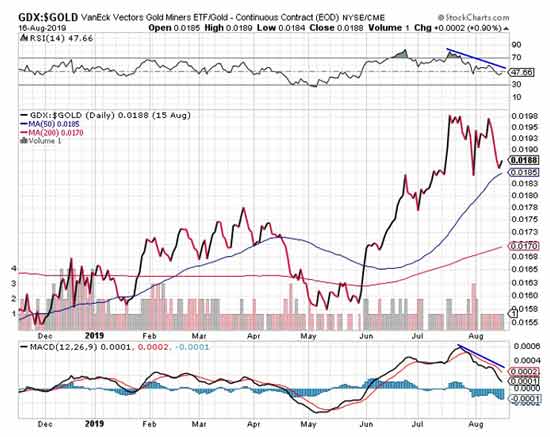 The DB Gold Double Long Exchange Traded Notes (NYSE: DGP) are now up 7.3% after being down 4% a month ago. Stay long DGP, but look for weakness before buying.

The VanEck Vectors Junior Gold Miners ETF (NYSE: GDXJ) recently peaked at $42 with gold’s push beyond $1,500, and is now up by 29% since mid-January. Here too, stay long or look for weakness before buying.

One of the most underreported bits of gold news in the past month was that the fourth Central Bank Gold Agreement, meant to coordinate and limit gold sales since 1999, will not be renewed.

As this chart shows, sales by CBGA members have been almost nonexistent since 2012. 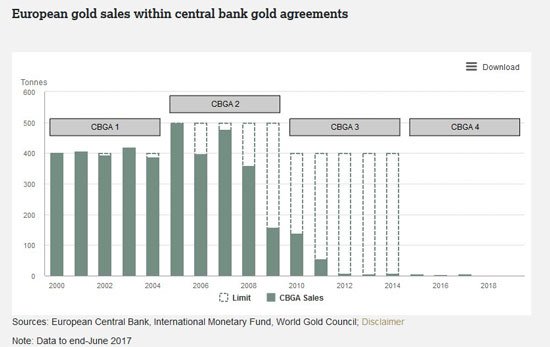 More than likely, they’ve become more interested in buying gold. As we’ve seen, many central banks have been buying hand over fist…

The World Gold Council confirmed this recently, noting central banks may be on pace to buy 700 tons this year, outpacing last year’s 651.5 tons, which was a 50-year high.

Now, although the price of gold could be headed towards $1,600, I suggest caution. There’s still a likelihood of correction beforehand.