American investors have never experienced such a profitable run…

The bull market in stocks, now in its 11th year, is officially the longest on record. Many shareholders have tripled their money since 2009. This bull market has created more U.S. millionaires than ever before. Households with a net worth exceeding $1 million have increased to 11.8 million in 2018 – that’s more than the population of Greece or Portugal…

On the surface, the economy is humming, too.

The median household income is now above where it was in 2007 (and climbing), and U.S. national home prices are holding up well.

There’s just one BIG problem: More than half of all this new wealth is set to vanish. It could start to happen as early as Labor Day.

And this wealth isn’t just going to up and disappear on its own. It’s essentially going to be taken from the American people via an unholy combination of callous greed, breathtaking stupidity, and outright malicious lies.

Yes, this is disaster by design – and there are fingerprints all over it…

How Regular Americans Are Still Victimized by the Credit Crisis

I’ve laid out the seven drivers of this collapse for my Critical Signals Report readers (you’ll get a chance to subscribe at no charge in a minute) but I think everyone should be aware of a few things – starting with the people who did this, and why and how they’ve done it.

It’s important to know that the very gang of insiders like Hank Paulson, Tim Geithner, Larry Summers, and Ben Bernanke (who helped design and then trade this rigged system) have done so to their own advantage.

The very bankers who caused the 2008 crisis became the foxes guarding the henhouse of their own ill-gotten financial “recovery.” Alas, since 2008, everything has changed into a centralized, pro-Wall Street market that rises every year while the real economy and wages on Main Street stagnate.

For example, let’s keep in mind that Hank Paulson – the secretary of the Treasury in 2008 who authored the “bailout” – was himself a former (and highly controversial) Goldman Sachs CEO who helped convince Congress and the White House that the only way to save America was to save the “too big to fail” (TBTF) banks like Goldman Sachs.

And as for the heroic bank “regulators” that D.C. subsequently put in place to “monitor” those foxy banks, they were themselves just bankers – insiders with a vested interest in keeping banks and the risk-on markets they serve a priority over the real U.S. economy and the hundreds of millions of “little people” who invest, live, and work in it.

But if you are hoping that our Congress has its eyes on protecting you from these insider priorities with an objective eye, it’s worth pointing out that for every member of the U.S. Congress, there are five financial lobbyists attached to them.

Now ask yourself this: Can such a rigged system of financial “influence” over lending and budget regulations possibly lead to fair and objective financial stewardship from D.C.?

The obvious answer is… nope.

Sadly, one must consider the evidence that our congressional and regulatory process is largely rigged in favor of a singular and powerful class of influence-buying Wall Street and bank executives (and the bought-and-paid-for legislators who support their high-risk survival).

Henry Ford once observed that if Americans actually knew how banks operated, there would be a revolution in the streets. Unfortunately, very few understand how banks create money out of nothing and then lend it at interest (via the fractional-reserve system of the private, TBTF banks and the QE system of the central bank).

As former Morgan Stanley, Dresdner Bank, IMF, and World Bank veterans, however, we at Critical Signals Report know all too well how the sausage is made…

But worst of all, if we just focus on facts and math, rather than rants or partisan bias, we quickly discover that as markets, Wall Street, and the top 1% reap the benefits of this entirely rigged “bailout,” the U.S. middle class has been sold out. 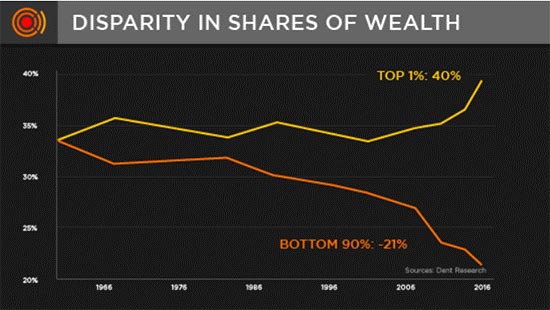 Today, we have historically unprecedented wealth disparity in America. Fifty-two percent of American children live in welfare-assisted homes, and 40% of U.S. households can’t afford a $400 emergency – a busted window, for instance – without having to sell something.

According to the U.S. Social Security Administration, 50% of all U.S. workers made less than $30,500 last year. Over 7 million Americans are defaulting on car loans; there’s greater than $164 billion in student loan defaults; and with 480 million credit cards in circulation, the average American carries three credit cards to juggle over $1 trillion in credit card debt.

How could things be this lopsided?

The answer is as simple as it is sad. By the time the markets began their “recovery” in 2009, 80% of the nation’s stock market wealth was in the hands of just the top 10% of the country’s wealthiest families.

By 2016, this percentage climbed to 86% of all stocks. In short, the vast majority of 401(k), hard-working America was not reaping the rewards of the post-’08 melt-up.

Instead, they were still licking their wounds from the 2008 disaster unleashed by the top 1% of American wealth – the very banking class that is rigging the current melt-up and best prepared to hedge against the inevitable meltdown to follow…

NOTE: You can get all my “Rigged to Fail” wealth survival strategies and must-own investments by clicking here. It’s part of my free Critical Signals Report research service. Click here to subscribe automatically.

Needless to say, the wealthiest Americans could not only stomach the risks better, but were also better advised and thus able to ride the obvious (and record-breaking) melt-up handed to them by the Fed.

According to a Gallup survey, 45% of Americans had no money in the post-’08 markets, and of those that did, 43% were in passive index funds tracking the market with no advice as to risk management, key sector growth, or the importance of active management.

Sadly, these “buy and hold” retail investors were the ones who suffered the greatest losses when the markets failed. And they’ll suffer once more when it happens again.

Again, this is because the financial system is a rigged system that favors one segment – rather than all segments – of the real economy.

Of course, the key to sustaining such a bloated, rigged “securities” market today is to ensure that interest rates never get so high that those grotesquely rising corporate debts (today’s new “subprime”) become otherwise unpayable.

They’ve Made Money Artificially Cheap – Our Futures, Too

Indeed, record-breaking debt levels, which push stocks to nosebleed highs today, are so massive that any genuine or natural bump in interest rates would immediately kill the markets and the economy.

Such unnatural repression of rates (allegedly needed to hit a fictional “target inflation”) is thus a further and obvious sign of a rigged market.

In a fair, just, and natural market backdrop, for example, investors would be aware of these risks and thus be able to monitor and trade them by tracking equally fair and accurately reported levels of inflation.

But in a rigged system, such reporting is intentionally distorted to keep the fantasy of low inflation (and by extension, low rates) going, as low rates are the key to keeping a massive debt bubble from popping.

Toward this end, the math makes it objectively clear that we are being lied to about real inflation (much closer to 10% than 2%) so that the Fed can artificially suppress rates to keep debt-soaked markets rising rather than naturally allowing bond markets and true supply and demand forces to set the rates – and thus the rules – of a fair and sustainable system.

To rig inflation reporting, the U.S. government periodically shifts its reporting methodology, as it did in 1980 and again in 1990, to artificially depress the number. Consumer inflation is triple to quadruple today’s reported number using original methodologies.

Here’s what inflation (the top line) today looks like, vs. 1990s-based figures… 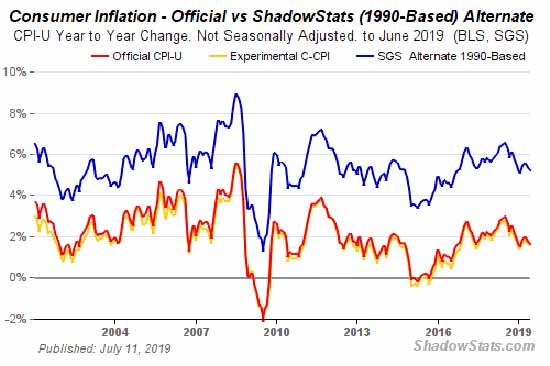 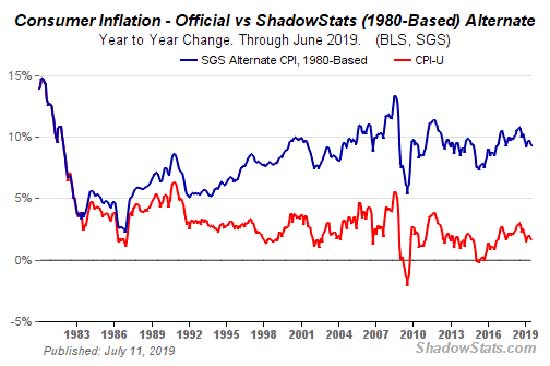 If honest inflation was accurately reported, rates would be naturally higher, and we would already be in the mother of all market disasters – right now. But again, lies keep this rigged game not only going, but at all-time highs.

But markets, like anything supported by lies, are hardly safe: The truth eventually gets the last word.

DID YOU CATCH THIS? Serial entrepreneur Neil Patel reveals what it takes to become the world’s next angel investor. Click here to watch…

The Fed, for example, knows full well that interest rates need to reach at least 4% or 5% in order for it to have rates high enough to meaningfully reduce in the next recession. But at this dangerous stage in the rigged game, if the Fed tries to raise rates in the very debt bubble of its own creation, the markets panic and turn fatal.

Yes, the Fed has literally lied and cheated and rigged itself into a corner. The ironies do abound.

And as we all saw in December of 2018, when the Fed tried to nudge rates up by even 0.25%, the debt-addicted markets nearly died and immediately sought an unnatural “new life” from the Fed.

In this rigged scenario of complicity to Wall Street, the Fed in Q1 famously paused further rate hikes to give new breath to this otherwise dying Franken-market.

And now, despite “Fed-speak” that says all is “reasonably good” for the United States, we are looking at rates going further down – a desperate emergency measure masquerading as “support.”

This is a dangerous game, and it’s ultimately rigged to fail.

In a normal, fair, and accurate market, such market downturns like we saw in Q4 of 2018 are to be expected, even welcomed, as they naturally dilute the “alcohol content” of otherwise over-valued/drunk markets and allow sober investors to consider risk management rather than drunken speculation.

But in totally debt-driven, low-rate, and rigged markets, such drawdowns are artificially revived via central bank rate manipulation that sends markets toward unsustainable highs that only buy time and rising markets at the expense of far greater pain (and crashing prices) down the road.

But folks, all you need to know now is this: By lying about inflation and hence artificially suppressing/pausing interest rates, the Fed and D.C. have shown us that the markets are rigged rather than “recovered.”

Again, we literally trade in a Frankenstein market, and there is monstrous horror ahead.

Click here to get my FULL “Rigged to Fail” report, including three easy-to-execute strategies and every investment you’ll want to own to survive and prosper when this rotten system collapses. You’ll hear from me every week with Critical Signals Report updates, too. This service is ABSOLUTELY FREE – and it always will be.

Neil Patel is one of the most successful angel investors on the planet.

Today, he’s walking everyone through his “1,000x formula” for finding the most successful startup investments – the ones with unicorn potential.

With this formula at your disposal… investing in startups is about to get a whole lot easier. (In fact, you can act now with as little as $50.)