Last week, I asked if the price of silver‘s decline since the Fed rate hike had been enough. I believe it has, and it’s a turning point for silver…

At the time, I suspected we were very close.  After all, the metal had lost as much as 7.5% in just two and a half weeks.  It seemed like the bottom should be near.

In the silver futures market, that bottom came on July 2.  In the spot market, it came a few hours later, overnight into July 3.  By then, it appears, anyone wanting out had sold. 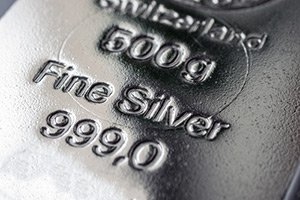 The rally in the U.S. Dollar Index (DXY) peaked a few days earlier at 95.4.  But by last Thursday (July 5), when the Fed’s June minutes were released, the greenback was already retreating.

The minutes revealed some Fed officials were concerned that raising rates too aggressively could cause the yield curve to invert.

And we know that sort of setup consistently precedes a recession.

Many FOMC members were also worried trade wars could stall economic growth.  With that in mind, the odds of two more rate hikes in 2018 were further in doubt.  Less hikes mean a less attractive dollar relative to other currencies, and so the dollar began selling off.

Massive Upgrade Could Send Bitcoin to $100,000: Click here to learn about the opportunity that could deliver a million-dollar payday to investors who act now.

So now, with the potential combination of a weakening dollar, a sentiment shift towards positive in silver, and seasonal tailwind, we could see the grey metal rally from here.

I’ll show you my exact silver price prediction too, but I want to take a deeper dive into last week’s silver prices first…

Silver prices reached a bottom around 1 a.m. on Tuesday (July 3).

The DXY was still up near 94.9, but then rapidly sold down to trade near 94.6 most of that day.  That weakness helped silver bottom and rally, opening at $15.93 then finally closing back at $16.

From there, silver would peak on Wednesday (July 4) at $16.13 around 3 a.m. before backing off to close at $16.06 on that shortened trading day. On Thursday before the open, silver backed down to $15.92 in anticipation of the Fed minutes but then rallied back even as the dollar gained.

The DXY hasn’t managed to best its highs of 94.5 of that day, while silver ended trading sideways around the $16 level. Take a look…

Here’s a look at the DXY for the past five trading days. 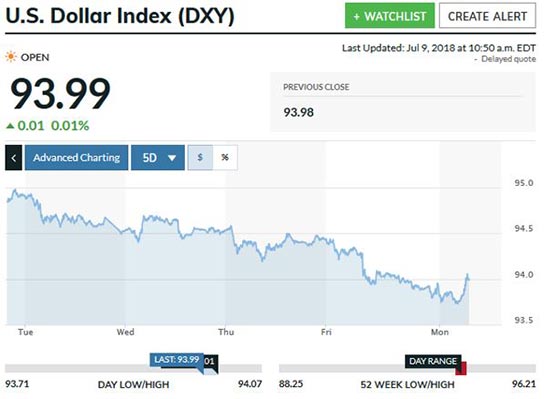 But the dollar index would gain still more strength, peaking near 94.20, then settling closer to 94.10. The price of silver backed off and hovered near $16.08, where it finally closed.

But now that the price of silver has turned around, here’s where I predict silver prices heading next…

The dollar’s behavior looks increasingly like it is done rising. 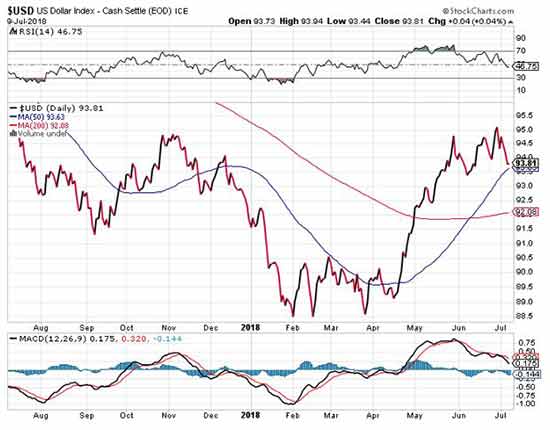 Both the relative strength index and moving average convergence/divergence continue to trend downwards, suggesting the path of least resistance for the dollar could well remain lower.

Looking at the silver price itself, we see that the strong sell-off appears to have put in a bottom followed by a swift reversal. 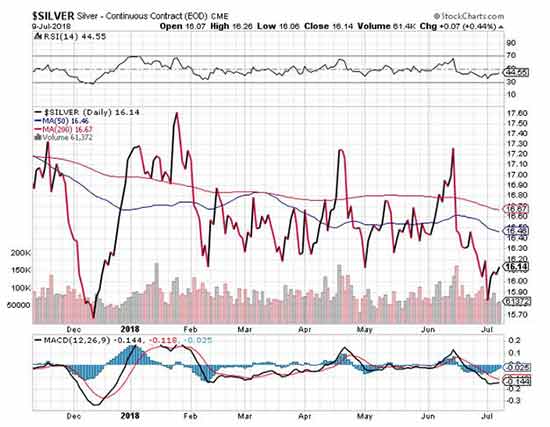 In fact, this recent sell-off looks a lot like the one of last November/December. If the recent bottom near $15.80 holds, it will be a higher low than in December, near $15.70.

Meanwhile, the gold-to-silver ratio has bounced back since mid-June. 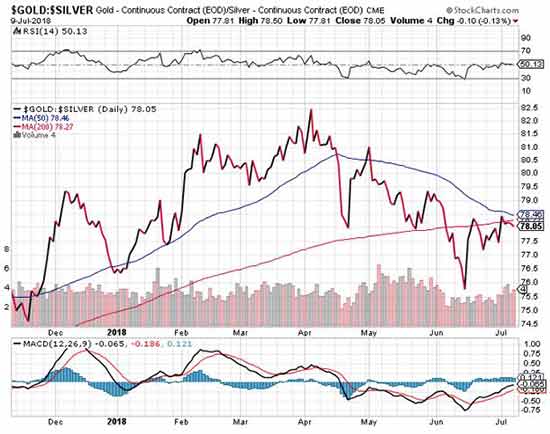 For now at least, it remains below the 50-day moving average, and that average continues to trend lower.

And, finally, the silver-stocks-to-silver ratio… 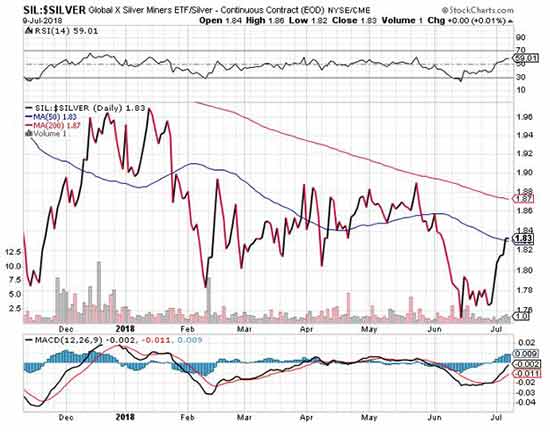 Silver stocks sold off in relation to silver prices from late May into early June, then consolidated for two weeks. And in the past week, the ratio has roared back, with stocks gaining on the already rising metal.

This may also signal that sentiment had gotten oversold, and this rise in the silver equities could portend a significant bounce in silver.

I think silver could still regain the $17.20 level by summer’s end, then perhaps even challenge $18.50 by year’s end.

There’s no guesswork involved, and the best part is – it’ll only take you 10 minutes per day! Click here now to start this once-in-a-lifetime journey…