Investors need a diversified portfolio, but not everyone has the tolerance for including risky, speculative stocks in the mix. But for those who do, the cannabis sector is one that has shaken off the initial exuberance that came with the legalization of recreational marijuana in Canada in 2018 and still offers interesting long-term opportunities…

Some companies are continuing to grow with the budding market, and others have overspent building infrastructure — perhaps because they thought U.S. legalization would have arrived already. If you have $1,000 to invest in 2021 and still want to bet on the eventual federal legalization in the U.S., two stocks worth a look are Aphria (NASDAQ:APHA) and EnWave (OTC:NWVCF).

Strategizing for the future

Marijuana grower and distributor Aphria has been busy recently. In early November, it announced it would spend $300 million to buy U.S. craft brewer SweetWater Brewing Company. Not only will this acquisition be immediately accretive to earnings before interest, taxes, depreciation, and amortization (EBITDA) and diluted earnings per share, but there is also a clear cultural and product fit. In 2018, SweetWater released a hemp-strain IPA called 420 Strain G13, which earned the title of top craft brand in the U.S. in its first 12 months on the market.

SweetWater has a growing business. For the year ended Dec. 31, 2019, the company reported revenue of $67 million, adjusted EBITDA of $22 million, and a growth rate of twice the national craft beer market, according to the announcement. But Aphria’s strategy isn’t for short-term income here. It’s for the growing U.S.-based market. SweetWater is currently available in 27 states plus the District of Columbia, and Aphria said that it provides “a platform and infrastructure within the U.S. to enable it to access the U.S. market more quickly in the event of federal legalization.”

Aphria’s next strategic move was to merge with fellow Canadian cannabis grower Tilray (NASDAQ:TLRY). Aphria shareholders will own about 62% of the newly combined company, should it be finalized. It will continue under the Tilray name, but be led by Aphria chairman and CEO Irwin Simon. The combination will make it the largest current global cannabis company in terms of revenue.

These moves come at a time of growing sales, and a lower share price, as can be seen in this three-year chart. 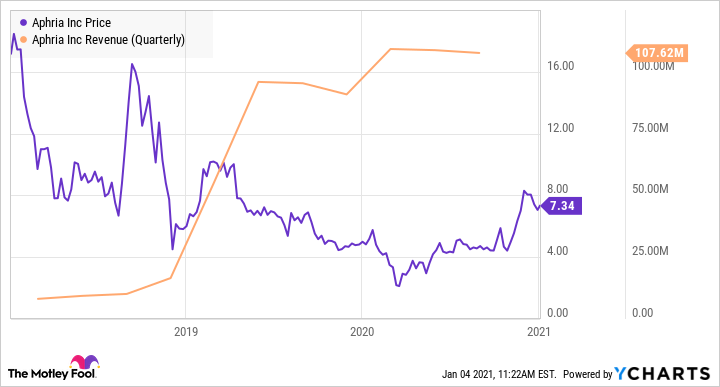 Technology for the growers

EnWave offers growers a patented dehydration technology to replace freeze drying or air drying for a faster, high-quality drying process. This efficiency allows growers to increase production, which will increase sales when demand is sufficient.

← 3 Marijuana Stocks That Could Skyrocket in Just 2 Days
Cannabis Stocks are Soaring Today, Here’s Why →