Bitcoin prices fell 3.4% to $8,275.21 on Wednesday as markets continued a broader sell-off in the cryptocurrency sector.

That’s creating a buying opportunity for savvy investors. We’ll show you one major reason why in just a second.

The price of Bitcoin fell to its lowest levels since April 19. Meanwhile, Bitcoin Cash and EOS (the fourth and fifth largest cryptocurrencies by market capitalization, respectively) both fell more than 9%. 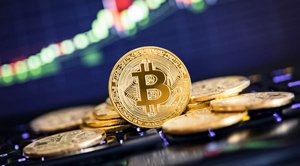 BitMEX co-founder and CEO Arthur Hayes projected the price of Bitcoin will surge to $50,000 by the end of 2018 during an interview with CNBC.

Hayes dismissed the downturn in Bitcoin’s price during the first quarter, but acknowledged that his firm is making money no matter which way it goes as a margin trading platform.

“If it goes up, if it goes down, if you have Bill Gates calling it a fraud… Short it, I don’t care. If you think it’s going to be $1 million in a few months, great, buy it. I still don’t care. We just match trades,” Hayes said.

Here is a recap of the top five cryptocurrencies by market cap as of 9:00 a.m. EST:

Now here’s a closer look at today’s Money Morning cryptocurrency insight, including our own way to profit from Bitcoin’s latest price slump…

Money Morning Insight of the Day

BTC prices might be down for the moment, but that’s not going to last…

You see, a new innovation coming to the Bitcoin network is going to be a game changer.

Here’s everything you need to know about this breakthrough, including how to unlock monster profits…

The Top Cryptocurrency Stories for Wednesday

At our recent Bitcoin 20X Summit, we uncovered information that left many folks stunned – and re-evaluating everything they thought they knew about the crypto market.

← Oil Prices Will Keep Climbing Thanks to Iran, and so Will This Stock
Here’s Proof: Silver Prices Are Inches Away from Exploding →