Today has been a rollercoaster for oil prices. In fact, oil prices spiked 2.6% earlier this morning (Monday) after two oil tankers were attacked near the Strait of Hormuz. A third of the world’s crude oil moves through the strait between the Gulf of Oman and the Persian Gulf. 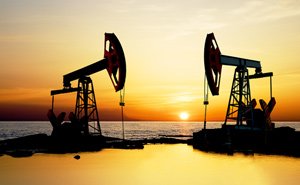 Oil prices initially skyrocketed as a result of increased concerns involving the disruption of oil supplies in the Middle East. However, the rise in oil prices was short-lived. And much of the decline was a result of the U.S. stock market’s avoidance of riskier assets like oil.

Both the United States and Saudi Arabia suspect Iran is behind the attacks. And this is largely because it came after the U.S. had increased its military presence to tackle the threat of Iran in a move meant to eliminate Iran’s oil trading.

After the attack, the Saudi Arabia energy minister said there had been a significant amount of damage to both of the tankers. But he reinforced that there were no signs of an oil spill.

And to help you make the most money during this volatile time, here’s a deeper look at what’s happening to the price of oil…

What the Tanker Attack Means for the Price of Oil

At first, it was surprising to see oil prices were up 2.6%, while equities were down over 2%. But the stock downdraft finally caught up with oil prices.

Theoretically, oil prices should be heading higher thanks to a disruption to supply. But because of the stock market downturn – and potential meltdown – it can’t appreciate in value.

Must See: The Defense Industry Is a Gold Mine – You Can’t Afford to Miss This $6 Company…

And much of oil’s decline in price is a result of the U.S. and China failing to reach a trade deal on Friday. This means riskier assets like oil fell again as the Dow Jones Industrial Average (DJIA) has dropped 600 points (-2.56%).

As the trade war continues, investors have become wary of the market. There will be slower global economic growth, and the growth of oil demand will also slow.

While oil is down after its wild day, analysts say it could still climb 1% to 2% depending on the level of uncertainty in the market. But how much it increases hinges on how big of a threat there is in the Strait of Hormuz.

For now, tensions in the Middle East appear to be increasing as well after the U.S. pledged an increased military presence over the threat of Iran. A conflict with Iran could send prices surging even higher. That’s making this the perfect time to protect yourself by getting into one of our favorite oil plays.

← Don’t Fall Victim to the No. 1 Mistake of Marijuana Investing
Our Top Pot Stock to Buy Could Easily Double Your Money →