Shares of Canadian marijuana companies Aurora Cannabis (NYSE:ACB) and Aphria (NASDAQ:APHA), along with U.S.-based cannabidiol (CBD) products supplier Charlotte’s Web Holdings (OTC:CWBHF), have been on a tear since the U.S. election on Nov. 3…

That run appeared to be continuing today, with Aphria and Charlotte’s Web up 10% earlier, while Aurora moved up about 5%. Those jumps have since waned somewhat. As of 11:20 a.m. EST, Aphria shares are still up about 7%. But shares of Charlotte’s Web are up 3.5%, while Aurora has given up virtually all of today’s gains so far.

The cannabis sector in general got a boost from the U.S. election earlier this month. The stocks of these three companies are up between 50% and 80% since then. 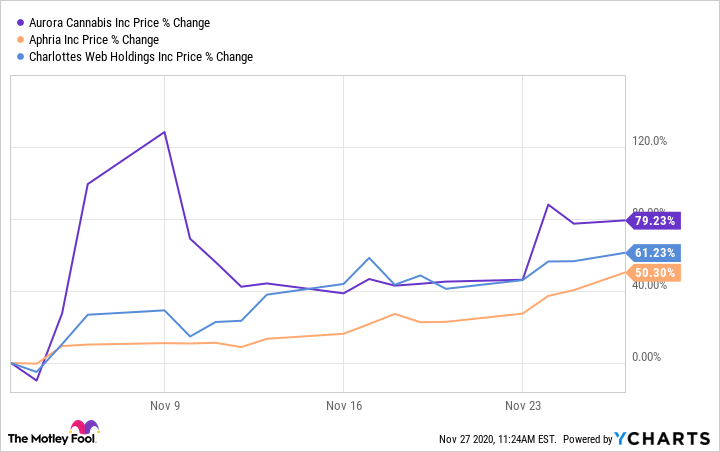 But to put it more in perspective, of the three, only Aphria shares are positive since the start of 2020. The election moved more buyers into the sector due to some wins at the polls. Five states — New Jersey, Arizona, Mississippi, Montana, and South Dakota — had ballot initiatives related to legalizing marijuana, and all five passed.

Today’s continuation of the election push may be related to the relief created when President Trump yesterday said he would “certainly” leave the White House if the electoral college officially elects Joe Biden president next month.

A Biden administration may be more friendly toward initiatives for legalizing pot, but shares of each of these companies will trade on their own business fundamentals. And only Aphria has announced significant news recently.

Aphria recently announced it is acquiring U.S. craft brewer SweetWater Brewing Company. This seems to be a good fit, and the company said the purchase will be immediately accretive to earnings.

On the other hand, Aurora spent much of this year restructuring its business and raising capital as it incurred growing losses. The changes included cutting jobs, consolidating production, and…