The price of gold is rising as we approach the December Federal Open Market Committee (FOMC) meeting and another possible rate hike.

In fact, the metal closed at a five-month high earlier this month.

A rate hike is almost unanimously expected, and that’s likely going to be the case. But recent stock market weakness has changed the U.S. Federal Reserve’s message since the last meeting. Fed Chair Jerome Powell is sounding increasingly dovish.

A forecast for four rate hikes next year has morphed into a consensus nearer two or three.

Perhaps that’s what’s fueling gold prices higher. They’ve been climbing even as the U.S. dollar has risen on balance.

But this week will be pivotal for the price of gold.

The last three December Fed rate hikes have all coincided with gold price rallies. I expect the same kind of reaction again this time.

So a rally in gold between now and March is favored by strong odds. I’ll show you exactly what sort of gold price target I’m looking at, but first, let’s take a look at what made last week so good for gold…

The Stock Slump Has Been Good for Gold Prices

After a small decline, gold spent the first half of last week consolidating around the $1,244 level.

The dollar index began a gradual climb early in the week, rising over 100 basis points from the previous week, from 96.5 to 97.5. Its safe-haven appeal was apparent once again as stocks struggled and bonds enjoyed renewed buying. 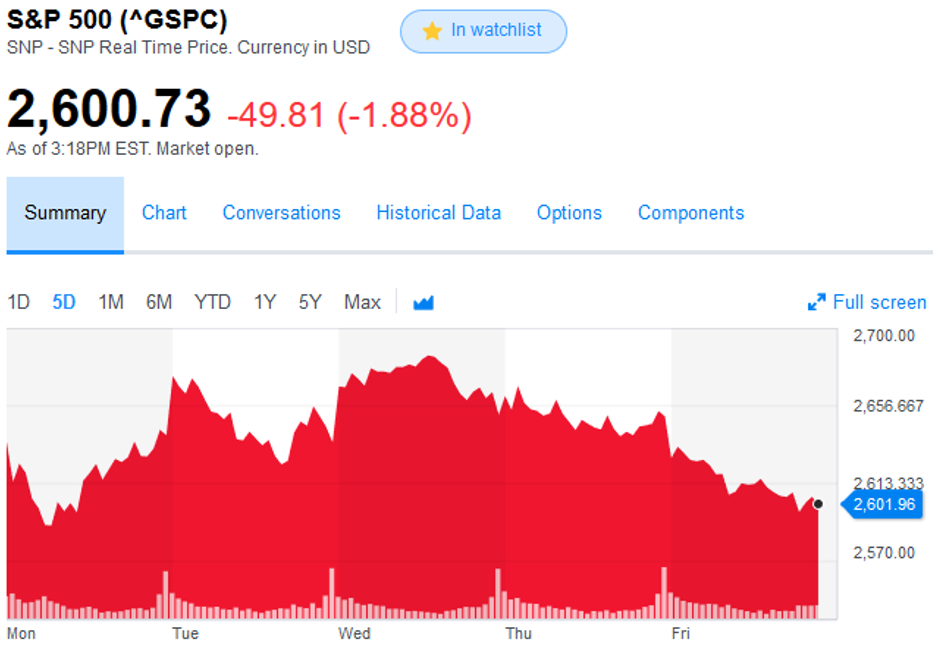 It was a near-perfect round trip as volatility remained present.

And you can see the U.S. Dollar Index (DXY) moved nearly inversely, hitting a high on Friday as the S&P 500 neared a weekly low… 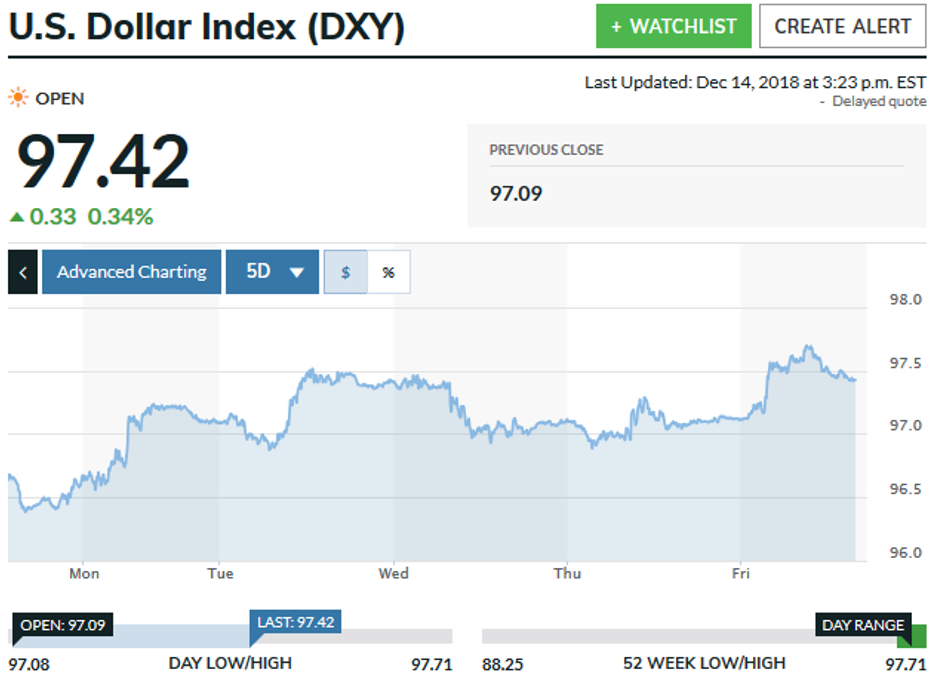 On Thursday (Dec. 13), a 27,000 drop in U.S. jobless claims showed labor-market robustness, detracting from gold’s appeal. That same day, the ECB confirmed it was ending its bond-buying program, but it also said it was intent on keeping rates at current record lows until at least next summer.

That dovish stance boosted the dollar against the euro, slightly denting gold, which ended the day at $1,242.

Then on Friday (Dec. 14), gold prices fell $10 per ounce just after 9 a.m. thanks to a strong revision in U.S. retail sales for November. Global economic and trade worries and the anticipation of a rate hike certainly didn’t help.

That pushed the DXY all the way to a 1.5-year high, but just temporarily. It reversed slightly even as stocks continued selling off on global growth worries. And that helped the price of gold regain some of its losses to trade at $1,238 by late afternoon.

What a Rate Hike Means for the Price of Gold

The dollar has managed to consolidate on the high side, but its momentum indicators continue to lose steam. I’ve outlined them here… 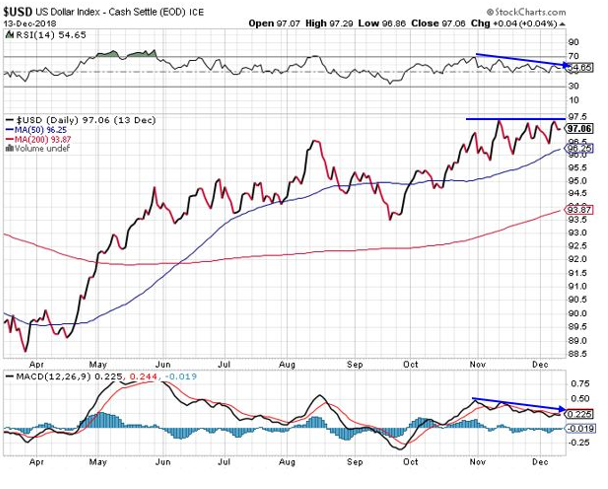 And now, with a likely Fed rate hike in a few days, here’s a look at what the DXY did in the wake of the last three December hikes.

You can see from the lines I added that the DXY has trended down three times in a row. 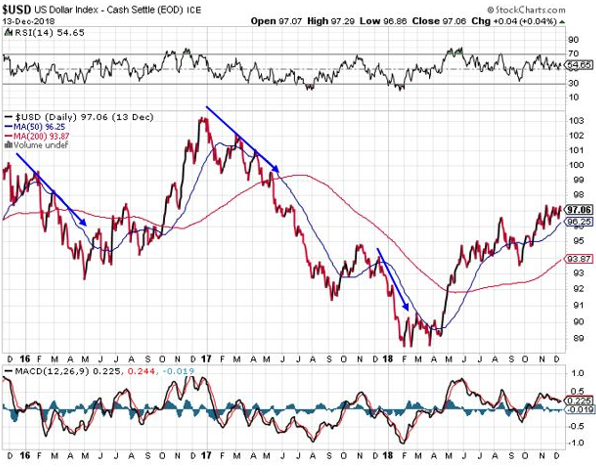 You can clearly see that in each of the last three years, the dollar fell after those year-end rate hikes.

And given the negative momentum of the DXY over the past six weeks, I think this year will produce similar results. Once again, what we’re likely seeing now is more “buy the rumor, sell the news” action in the dollar.

Even with the news weighing on the DXY, gold’s been acting well of late.

I believe gold is digesting its recent gains as it builds energy for a further move higher.

The relative strength index and moving average convergence divergence momentum indicators have plenty of room to run up before becoming anywhere near overbought.

I’ve highlighted these indicators on the chart below so you can see how the momentum is pushing gold toward $1,260. 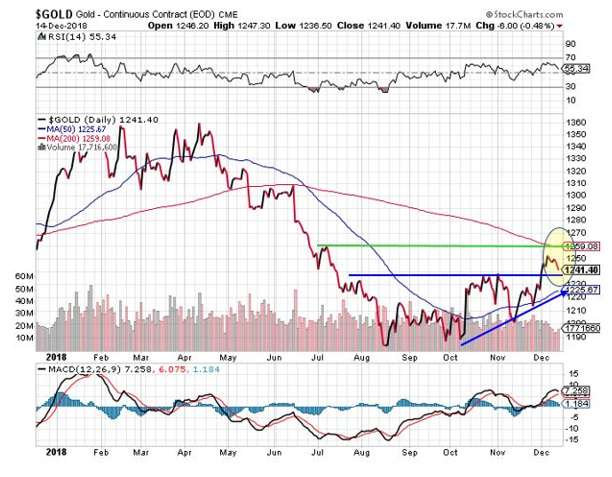 Another indicator that’s bullish for gold is the gold-stocks-to-gold ratio. 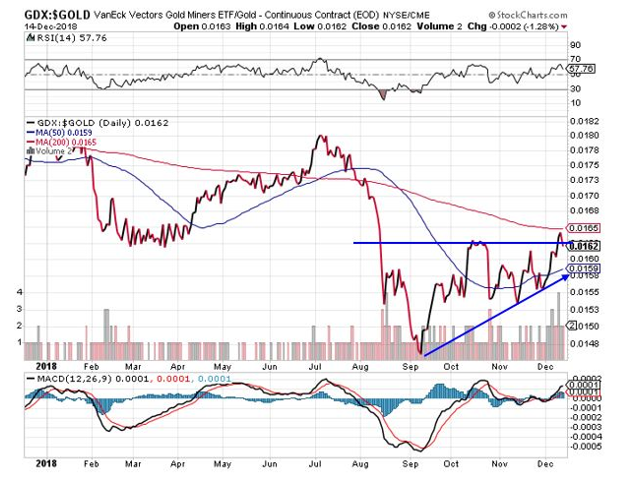 The ratio has been establishing a series of higher lows, and like gold, it just broke out above multi-month resistance.

As gold stocks will often lead the metal higher, this is a bullish development that supports the view that gold is headed higher in the near term.

This should be an interesting week for gold and its drivers as we approach the holidays.

← Better Marijuana Stock: Cronos Group (CRON) vs. Scotts Miracle-Gro (SMG)
21 Billion Reasons Why Blockchain Investors Have a Great Year Ahead of Them →