The price of silver has been in a holding pattern since late February, but that’s about to end now that the Fed is getting out of the way. Today I’ll show you all the technical support silver has right now, plus my latest silver price prediction.

Yesterday (March 20) the Fed announced interest rates would be on hold for “some time” in the face of global risks weighing on the outlook for the economy. That was enough to take the price of silver out of its previously narrow holding pattern between $15 and $15.40. The Fed’s recent announcement was enough to push silver from $15.30 to $15.50.

The U.S. Dollar Index (DXY) took a hit, losing 75 basis points on the news before clawing back slightly.

Now, it’s looking more like the silver price’s correction has run its course, and the metal is preparing itself for the next run higher.

What’s Rallying the Price of Silver

Like gold, silver prices had a tremendous run from their early-November lows. 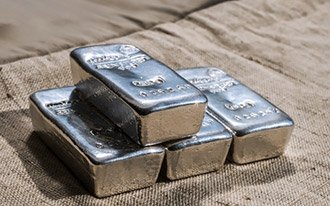 That made for a 14.3% run, which is likely still being digested right now, as the price of silver is moving sideways – and silver near $15.35 means it’s trading just 4% below its February peak.

Since February, the dollar has also been consolidating. After a rally that took the DXY above 97.5, it has already given up about 150 basis points, as seen in the chart below. 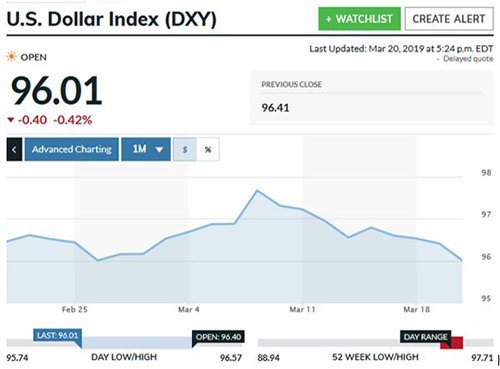 And if we make an almost direct comparison between silver and the dollar for the past month, we can also see a strong negative correlation. See below how the dollar dips and the price of silver swings up. 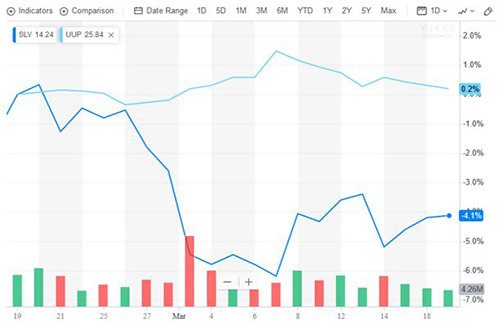 According to the March 12 CFTC Commitments of Traders report, silver hedgers (regarded as the experts in silver) have been reducing their short silver futures exposure. This suggests they see current silver price levels becoming more attractive, as reduced hedging could mean expecting less downside risk.

Special Announcement: We’re giving away this new income book exclusively to Money Morning readers – claim your copy of “The Book of Crazy Big Income” at no cost today. Click here…

Although silver has so far bottomed below its January low of $15.25, its recent action is encouraging.

Notice in our six-month silver chart that, until now, silver’s low of $15 has remained above the previous overhead resistance of last fall at $14.75.

If we look at silver’s seasonal pattern, we are right at the point where silver tends to reach a temporary March bottom before rallying into the end of April. 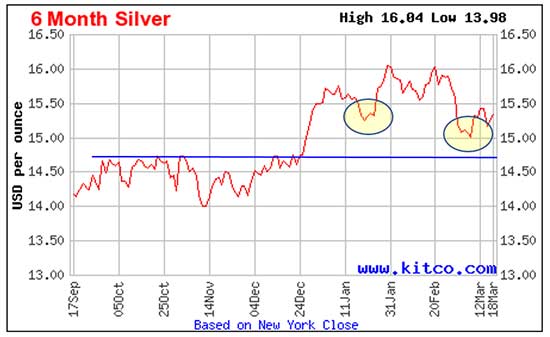 On average, the silver price does tend to struggle in May and June. However, given how undervalued silver already is by itself and compared to gold, there’s a decent chance it could buck its typical spring weakness.

Maybe, just maybe, the next rally can pull silver above its $16 high of late February.

Now, some clear evidence that silver can pull this off.

Numbers Behind the Price of Silver

While any near-term trend in the dollar seems difficult to determine, it has had a mild upward drift since early January. After yesterday’s action, though, it’s now lower on a year-to-date basis. 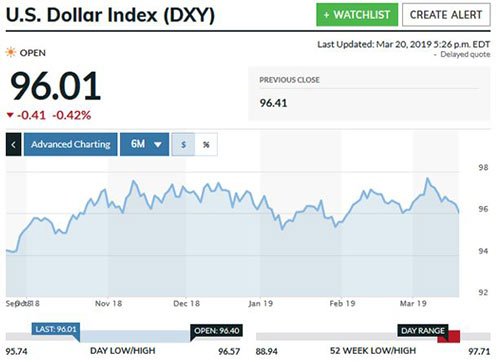 With no more hikes expected from the Fed this year and a slowing of its bond drawdown program which will now end in September, this was about as dovish as the market could expect. Quantitative tightening is coming to an early end.

That’s likely to weigh on the dollar going forward, everything else remaining equal. So if the dollar does indeed start to trend downward, that should be additional wind in silver’s sails.

That help from the Fed is coming at the perfect time, too. Silver has marked a golden cross in early February, and its recent pullback seems so far limited to its 200-day moving average.

Technically, silver is also looking good from the perspective of momentum. Notice that both the relative strength index and moving average convergence divergence appear to have bottomed along with silver in early March.

So far these indicators have been confirming what may be a new uptrend for silver.

And much like silver, silver stocks have been in a clear uptrend since mid-November. 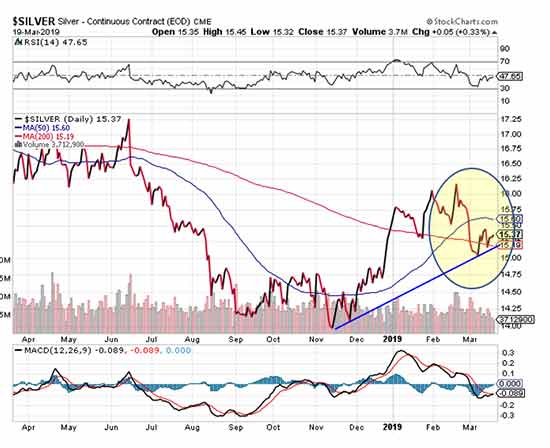 The next chart gives us a closer look at the last six months, including the golden cross in early February. 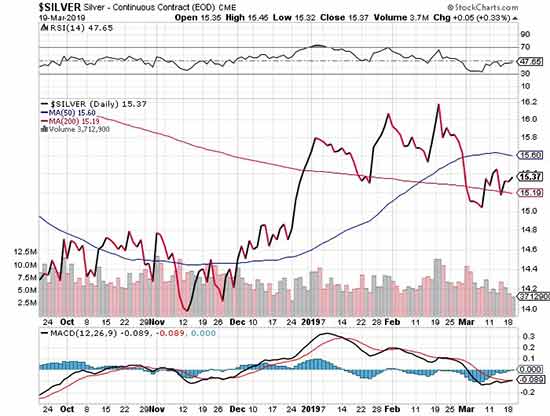 But perhaps even more significant is the action in the silver-stocks-to-silver ratio.

Silver equities have outpaced silver’s own gains, which we can see from the rise in this ratio since late January. 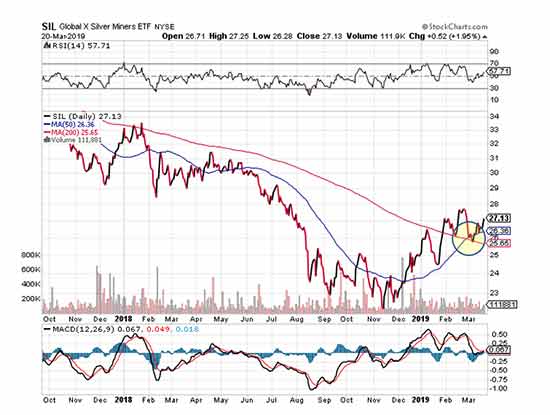 In fact, the ratio is not only above its 50-day and 200-day moving averages, it’s also in the process of forming its own golden cross (chart below). 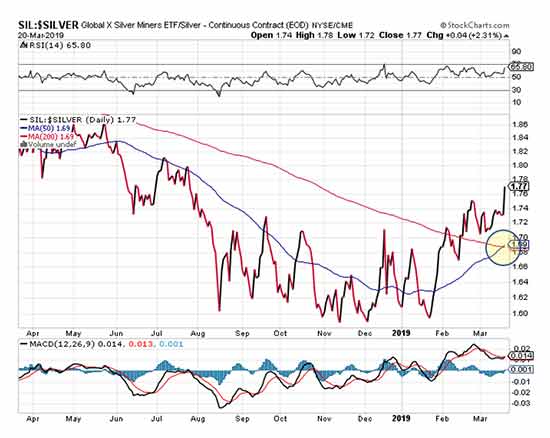 So this bullish setup, with silver stocks rising faster than silver itself, suggests we could be in for a decent rally over the next weeks and even months.

On top of all these bullish technical signals for silver and silver equities, there are plenty of fundamentals driving that point higher as well.

And if you want to maximize your profit on silver, I’ve got three silver investments that will help you cash in on the new silver rally.

Plus, I’ll lay out my newest silver price target. You don’t want to miss it…

These Funds Are Good Bets on the Price of Silver

According to the Silver Institute, industrial demand for silver (about 60% of total demand), should rise broadly this year across most sectors. These include automotive, water purification, chemical applications, high-tech lighting, electronics, and anti-microbial uses. Solar applications should continue to be robust as well.

As one of the largest silver consumers, India’s imports were almost 225 million ounces last year, a 35% jump over 2017. Also, jewelry demand is forecast to see strong gains this year. And with silver-backed exchange traded products (like ETFs) being mainly retail owned, their holdings are expected to see an increase of about 8 million ounces in 2019.

All of this, coupled with an expected drop of 2% in mined output, suggests a robust outlook for silver prices.

Here’s a quick review of my silver play recommendations from mid-January.

The SLV January 2021 calls with a strike price of $15 are off 11.5% since recommended. Given their long term to expiration, they remain a buy on dips. Once silver starts to move, these should act like rocket fuel.

The two-times leveraged ProShares Ultra Silver ETF (NYSE: AGQ) is down 2.9%. It’s an easy way to leverage silver prices, and it is also a buy on dips.

Finally, the Global X Silver Miners ETF (NYSE: SIL) has gained 7.5% since I said to buy in mid-January. SIL is a buy on dips. With silver equities leading the metal, you’ll want exposure here too.

I think silver could regain the $16 level this spring, which should help establish that level as a new floor. In the second half of this year, I expect the price of silver could eventually surpass the $17.50 peak of early 2018 to establish a higher high for this year.

One book could hold the key to completely transforming your life.

It contains 61 secrets that have the potential to double, triple, even quadruple your monthly income.

And it could be yours for FREE.

All you have to do is click here to learn how to claim your copy.

← You Can Boost Your Income by $47,208 with These Simple Secrets
This Small-Cap Alternative Energy Stock Is a “No-Brainer” →