There’s no sugarcoating it: The past month has been unkind to the price of silver. But strong evidence indicates the drought could end soon. 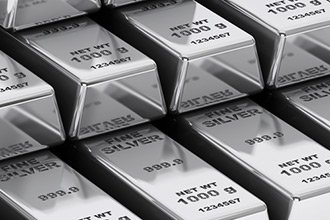 Topping things off, the U.S. dollar has been strong, testing silver’s highs of the past five months.

As a result, the silver price today is hurting. The metal has given back a dollar per ounce since late February.

And right now, it’s fighting to hold the $15 level, which has acted as strong support since early March.

But a month doesn’t make a trend, and we know silver prices are exceptionally volatile. Plus, it’s at precisely such times, when an asset looks especially hated, that investors should pay attention.

According to the Silver Institute’s 2019 World Silver Survey, the metal was in deficit last year, supported by high physical demand and inventory builds at silver exchanges.

So silver still has needs to fill. While we wait for the technical picture to improve, rest assured the price of silver remains in bargain territory. But that won’t last long…

Silver has struggled for the past two months since topping out at $16 in mid-February. It’s been treading water, floating between $15 and $15.50 since then.

The metal has been trying to stay above its 200-day moving average, which has so far managed to remain as key support. The technical price damage so far is limited, but silver needs to close above $15.25 to keep that support.

What’s especially noteworthy with silver, though, is how it’s held up relative to gold, especially over the past week.

As you can see on the chart below, on Monday, April 15, silver lost more than gold at the market open, then recuperated more.

But on Tuesday, April 16, as gold reacted to news that Venezuela had sold off nearly nine tons of its gold, worth about $400 million, silver mostly held steady. 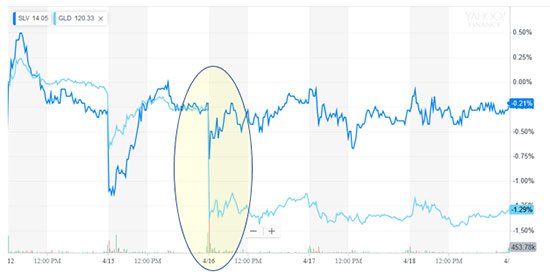 Both metals opened lower, but silver dropped much less than gold did, and over the next three days, it managed to hold its own as gold flatlined at lower levels.

Normally, if gold corrects, then silver follows, sometimes after a delay. But in this case, silver seems to have forged its own path.

It’s also worth noting that, despite a strong bump up in the U.S. dollar on Thursday, April 18, silver didn’t flinch. To me, this is starting to look like a sign of selling exhaustion, meaning the silver price could bounce back at any moment.

And this could be the catalyst that starts the rally…

How Geopolitics Could Boost Silver

Speaking of the dollar, it’s been particularly strong of late.

The U.S. Dollar Index (DXY) is at the top end of its 95 – 97.5 range, going back to mid-October, when stocks began selling off in earnest. Take a look… 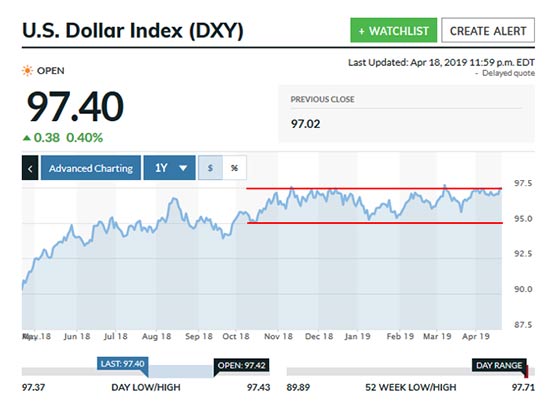 In my view, the most important thing to watch now is whether the DXY breaks above resistance at 97.5 or moves back down within its six-month-long trading range.

A push higher could weigh further on precious metals, though their simultaneous strength from the start of the year until late February shows they can move up in tandem.

If the United States announces a landmark trade deal with China in early May, as is now being suggested, we could see the dollar retreat as traders start to “sell the news.”

Silver Stocks Are on the Same Page

It’s clear from the below silver chart that its price has sustained some technical damage.

Though not by much, silver has traded just below initial support at $15 and dipped below the 200-day moving average in the process. 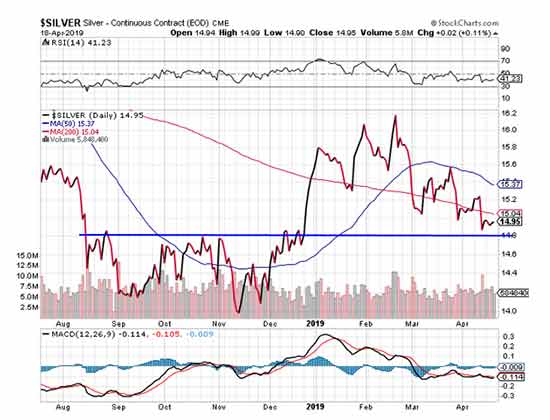 If that turns out to be the case, then realistically, we could be in store for a lower low.

If that happens, then the $14 level would provide the next strongest support, depicted in the below chart. 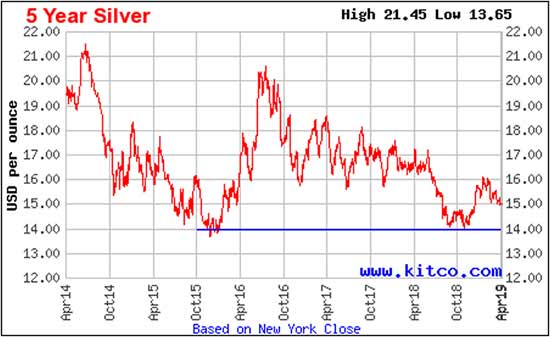 Looking at silver stocks, the picture is equally challenging.

But the “silver lining” is that the RSI is now below 30, indicating that SIL is oversold. That doesn’t mean the bleeding is over, but it could be close. 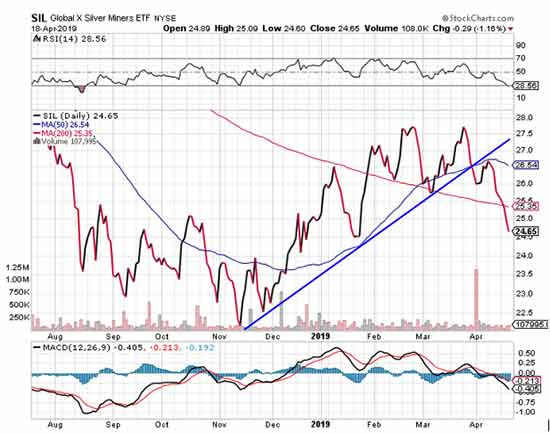 The action in the silver stocks to silver ratio is very similar: 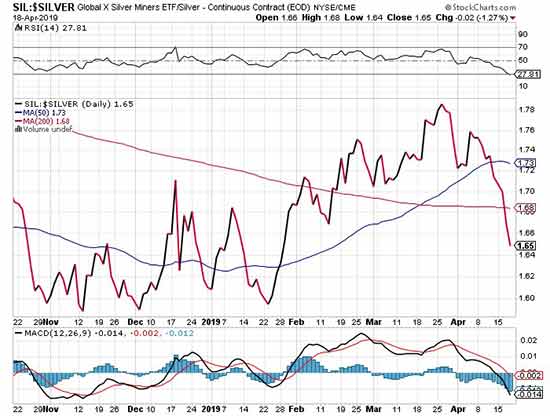 Given silver’s challenges over the past month and a half, my silver recommendations have struggled too.

The iShares Silver Trust (NYSEArca: SLV) January 2021 calls with a strike price of $15 are off 35% since recommended. Given their long term to expiration, they remain a buy on dips. Once silver starts to move, these should blast ahead.

The 2x leveraged ProShares Ultra Silver ETF (NYSEArca: AGQ) is down 9.7%. It’s an easy way to leverage silver prices and is a buy on dips.

Finally, the Global X Silver Miners ETF (NYSEArca: SIL) has fared the best but is still down 2.1% since I said to buy in mid-January. SIL is also buy on dips. With silver equities leading the metal, you’ll want exposure here, too.

Now, this picture may seem like a rough outlook for silver, but the good news is that it’s not the big picture.

In fact, what’s going on behind the scenes in the silver market could kick off the next rally this month…

The latest “World Silver Survey 2019,” published by the Silver Institute, tells us the outlook is promising.

Last year, total world demand rose for the first time since 2015, thanks to a rush from silver investors. Silver bar demand was up an astounding 53%, which helped drive overall investment demand by a remarkable 20.5% in 2018. India’s demand for bars leapt an astounding 115%.

Meanwhile, silver mine production was off for the third year in a row, down 2% to 855.7 million ounces.

The chart below tells us above-ground stockpiles of silver, totaling 2.5 billion ounces, were down 3% from 2017, but they are still large. Johann Wiebe, lead analyst in the GFMS Team at Refinitiv, responsible for the survey, believes silver will climb this year, but sees a ceiling around $20 due to stockpiles. 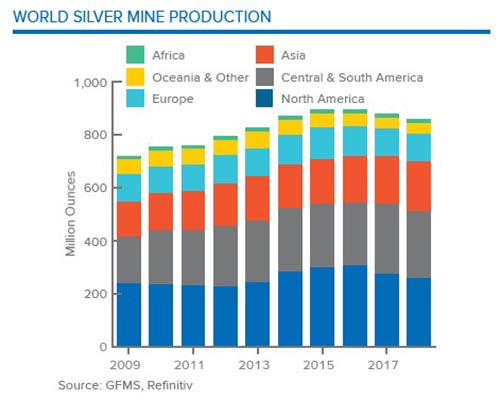 That said, demand for silver, new applications for which are being found with increasing frequency, is likely to burn through those stockpiles eventually. One great example is the adoption of EVs and hybrid vehicles, both of which need considerable amounts of the precious metal.

Consider that over the past decade, despite silver’s longer-term seasonal challenges in the spring, the metal has been up about 90% of the time during Q2: 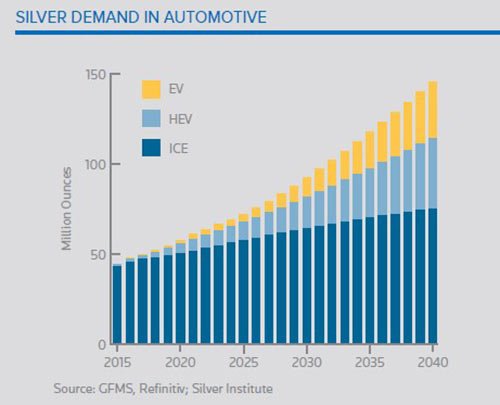 On that basis, we could still see a decent rally for silver in the near term. Silver’s first upside target is $15.25. I think that could be taken out in the next couple of months if silver manages to put in a bottom soon.