After a rough week for stocks and the Thanksgiving holiday, the price of silver remains one of the best deals around.

Of course, additional discounts may still lie ahead, but silver‘s inherent value at current prices is difficult to beat – no Cyber Monday promos required.

Silver prices had a good week last week, but they backpedaled on Black Friday (as did stocks) while the U.S. dollar found renewed vigor.

And the gold to silver ratio has once again popped higher in gold’s favor, making silver an even bigger relative bargain.

Prospering During a Financial Crisis: Incredible wealth-building opportunity for those who are prepared – quickly amass a potential $1.5 million retirement nest egg. Learn more…

The year is starting to draw to a close, but several market researchers continue to see massive potential for silver as we approach and enter the New Year.

Before looking at projections for 2019, here’s what is behind the recent movement in the silver price…

During a week that’s traditionally good for stocks, the trend was bucked this year as the S&P 500 lost a painful 100 points.

It was obvious that agile money moved into the dollar. The DXY started around 96.2 and ended the week near 97. As the week progressed, bonds were also favored as the 10-year Treasury yield dropped from 3.08% on Monday to 3.05% by Friday’s close.

Here’s the DXY’s moves of the last five trading days: 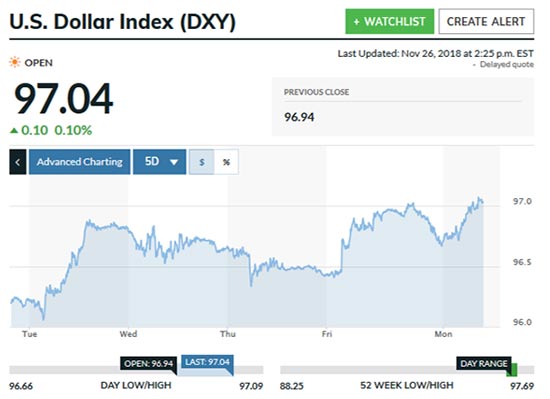 The dollar would lose a little ground through Wednesday and Thursday, dropping back to 96.5.

But with Friday’s renewed market sell-off, the dollar rallied again, pulling the DXY back up to 97 late in the day. That pushed silver back from $14.48 down to close the holiday week at $14.26.

Then on Cyber Monday, the dollar dipped early but regained strength as other major currencies sold off. The DXY was back at 97.5 by midafternoon. Silver gave back early gains from $14.40 to consolidate near $14.22 by 3 p.m.

Where the Price of Silver Is Headed in 2019

Looking at the U.S. dollar index from a multiyear perspective, there are suggestions that we may be bumping up against resistance around 97. 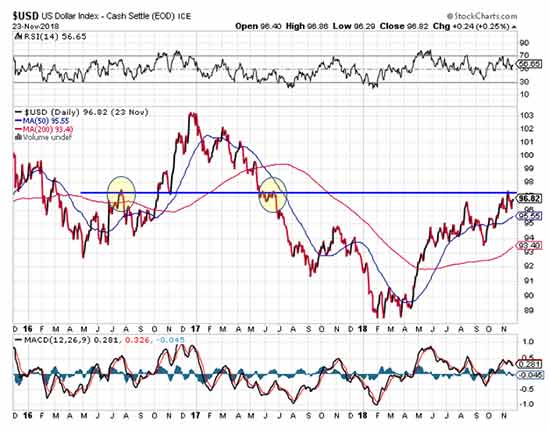 It’s entirely possible we’ll see the same sort of resistance again. Remember, U.S. President Donald Trump has been vocal about his dislike of higher rates from the Fed, and even the Fed itself has begun sounding slightly more dovish. The market’s gauge of four rate hikes next year has dropped back considerably.

As for silver prices, they seem to be struggling for direction. 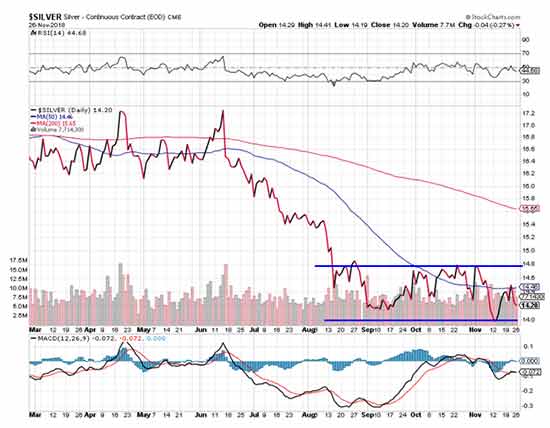 Ole Hansen, head of commodity trading at Saxo Bank, recently commented on the gold to silver ratio, saying that low holiday trading liquidity has weighed on silver. He also believes that worries about global growth are maintaining downward price pressure.

At the same time, Hansen says the historically high gold to silver ratio is attracting investors, but gold needs to rise to trigger buying.

Also, Mike McGlone, senior commodity strategist at Bloomberg Intelligence, said the current silver sentiment is at levels that have previously marked important bottoms. Silver has not enjoyed lately the same safe-haven support as gold while investors have moved to risk-off mode.

McGlone thinks markets will start to price in an end to U.S. rate hikes, taking momentum away from the dollar and supporting precious metals.

And lastly, Capital Economics’ senior commodities economist Ross Strachan recently said, “Looking ahead, we think that 2019 will mark a turnaround for the silver price. We expect the price of silver to rise to $17 per ounce by end-2019.”

He admits that silver will likely end 2018 with a surplus, but that stronger investor demand, lower mine production, and a bounce in solar panel production should erase any surplus next year.