Shares of Canopy Growth Corporation (NYSE:CGC) were climbing last month after the company made an acquisition and it began trading on the New York Stock Exchange (a subsidiary of Intercontinental Exchange).

According to data from S&P Global Market Intelligence, the stock finished May up 21%. As the chart below shows, most of the stock’s gains came in the middle of the month, as the Canadian cannabis company acquired the part of joint venture BC Tweed that it didn’t already own, and debuted on the NYSE: 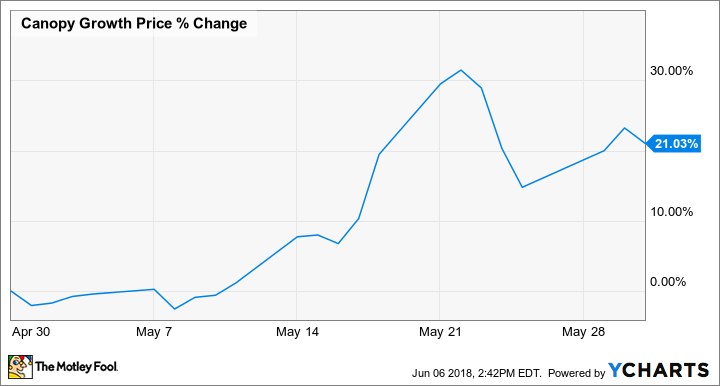 Canopy Growth is the world’s biggest marijuana company, and shares spiked 6.5% on May 14 as the company said it would get even bigger: It acquired the outstanding shares in the BC Tweed joint venture by buying the remaining 33% stake in the company. Management explained that “The consolidation of the two largest licensed cannabis facilities in the world into full Canopy Growth ownership cements the Company’s commitment to shareholder value through scale production,” and said it would pay for the purchase with…

Also on May 14, Canopy announced that it had applied to be listed on the NYSE, and expected to begin trading on the exchange by the end of the month. Prior to that, its stock only traded on the Toronto Stock Exchange.

In the days leading up to its May 24 debut on the NYSE, the stock surged 20%, but then sold off once trading began. Demand may not have been as hot as anticipated, or this could be an example of “buy the rumor, sell the news” investor psychology.

Like all marijuana stocks, Canopy Growth is highly speculative; the company commands a market value of more than $6 billion, but has little in the way of financials to underpin it — its revenue through the first three quarters of this fiscal year has been just $42 million.

However, Canopy seems to be making all the right moves to consolidate its leadership in the emerging industry, and the tides in North America and elsewhere are shifting toward broader legalization of marijuana. Canopy’s listing on the NYSE is a further sign of investor support, as is its strategic partnership with Constellation Brands. Already the stock is up 11% in June, as the company announced five new retail locations in Saskatchewan and said it would fund research into the role cannabis can play in addressing the opioid crisis.

If things fall into place for investors, this stock could be a huge winner. It’s already up nearly 1,000% since it went public in 2014.

Marijuana stocks are overhyped: 10 better buys for you now
When investing geniuses David and Tom Gardner have a stock tip, it can pay to listen. After all, the newsletter they have run for over a decade, Motley Fool Stock Advisor, has tripled the market.*

David and Tom just revealed what they believe are the ten best stocks for investors to buy right now… and marijuana stocks were noticeably absent! That’s right — they think these 10 stocks are better buys.