Oil prices may never reach their spectacular highs in 2008 again, and the reason is less obvious than you might think. And this subtle new trend could make OPEC completely irrelevant.

But that isn’t the most important consequence. How energy companies respond to what’s happening will be the difference between owning profitable stocks and clunkers.

In fact, once you see the chart below, you’ll never want to own a share of Exxon Mobil stock again…

Oil is always going to be part of the global energy mix, but investors hoping to cash in on another decade of $100 oil are going to be disappointed.

But the good times are coming to an end for America’s largest oil company.

Oil prices plunged from $106 a barrel in 2014 to a mere $27 a barrel in 2016, a 75% collapse. While oil has rallied since then, largely thanks to a concerted effort by OPEC to restrict oil supply to drive prices higher, the era of $100 a barrel oil is over.

And there’s nothing OPEC or Saudi Arabia can do to push prices into the stratosphere again.

That’s a bad sign for Exxon stock, but the reason for OPEC’s obsolescence is actually a profit opportunity for savvy investors.

The law of supply and demand has always governed oil prices, but OPEC can only manipulate supply.

When the oil cartel wants higher oil prices, they simply band together to cut the supply.

What OPEC (or any oil-producing country) can’t control is demand. And that’s where we’re starting to see the biggest change.

In reality, it could explain more about the declining oil price since 2014 than the surge in supply. Oil production has only grown by about 10 million barrels per day over the last decade.

Take a look at the chart below. Solar power has created nearly 500 million tons of oil equivalent in 2017 alone as solar power prices continue to plunge. 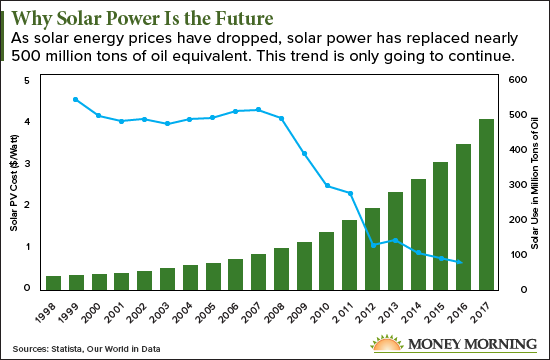 And this is just the start of the trend.

As the cost of renewable energy continues to fall, production will continue to soar. EIA estimates that solar power production alone will surge by over 500% by 2040. That’s going to continue to create less demand for oil.

It gets even worse for oil too.

You might think oil demand has a major cushion because it’s used for gasoline. In fact, gasoline is the top use for crude oil. But the IEA predicts there will be 125 million electric vehicles on the road by 2030. That’s an astonishing 3,932% more electric vehicles than are on the road today.

This will all come at the expense of oil demand. Petroleum is already the least popular source of electric power generation, and natural gas and renewables are now the cheapest source of new energy in the United States.

And that’s exactly why investors should steer clear of Exxon stock.

Why Exxon Stock Is a Bad Bet

While Exxon has the financials you’d normally salivate over in a stock – a growing bottom line, a big 4.1% dividend yield, and a sterling value trading at just 13 times earnings – the company is pushing all its chips behind oil.

This is a mistake.

Exxon is planning to spend $200 billion over the next six years to expand oil and gas production. These “megaprojects” are not just capital intensive – they take years to complete.

That has Wall Street souring on the stock. Edward Jones reasons “the plan bearing fruit is years away.” Meanwhile, Morningstar Equity Research downgraded the stock to a “Sell” rating.

And Exxon is spending billions on oil projects just as renewable energy costs fall enough to make them competitive against fossil fuels. In other words, Exxon’s making a massive bet on oil and gas at exactly the worst time. While there’s always going to be a need for oil, the company is taking a massive risk that it can sustain its $279 billion in revenue on oil and gas alone.

We’d avoid the stock and turn to one of Exxon’s supermajor rivals or a smaller oil firm not bogged down with billions of dollars in new projects.

That’s why we like Royal Dutch Shell Plc. (NYSE: RDS.A).

Instead of pouring more money into oil, Shell is doubling its spending on renewable energy. The company clearly understands the shifting demand for energy, and it’s using its muscle to capitalize on it.

Shell already acquired NewMotion, one of the biggest electric vehicle charging station networks in Europe, and bought Sonnen, a startup making residential batteries for solar panels to compete with Tesla Inc. (NASDAQ: TSLA). Plus, Shell just bought a 49% stake in Cleantech Solar, one of the leading providers of solar energy in Southeast Asia.

Now, Shell plans to spend $4 billion a year on renewables – doubling its current investment – while it plans to offer electric car charging stations alongside gasoline at its retail outlets.

While oil and gas will continue to play a major role in Shell’s business, it’s clear the company’s leadership has the foresight to navigate the shifting energy market.

Plus, this is the perfect time to buy the stock.

The company has grown its profits for four years straight, boasting a massive $18 billion profit last year. That’s how the company can pay a lucrative 5.2% dividend yield. You won’t find that sort of income in any bond or savings account right now.

It’s no surprise Wall Street is optimistic about the company. Shell has an average price target of $75 a share for the next 12 months, but some analysts project the stock will rise to $88 a share. That’s a 43% gain from today’s price of $61.57.

We’re even more bullish. Shell sports a perfect Money Morning Stock VQScore of 4.75, placing it firmly in the “Buy Zone.” And the last time we recommended a company in the “Buy Zone” tapping into the renewable energy sector, its share price surged 100% higher.

America’s No. 1 Pattern Trader, Tom Gentile, is giving you a rare opportunity to learn how to amass a constant stream of extra cash – year in and year out.

And he’s going to teach you how to do it entirely on your own.

Go here to claim your seat in America’s No. 1 Pattern Trader Cash Course…

← Analyst initiates coverage of Tilray with an Underperform rating
A massive disruption could be on the way for marijuana: 3 Stocks Poised to Profit from it →