The prospects for the Facebook cryptocurrency, known as Libra, dimmed a bit further this week.

This time it was another excruciating Capitol Hill appearance by the social media giant’s CEO, Mark Zuckerberg.

On Wednesday, the Facebook Inc. (NASDAQ: FB) chief was called before the House Financial Services Committee to answer questions about the Libra cryptocurrency. Libra has endured an 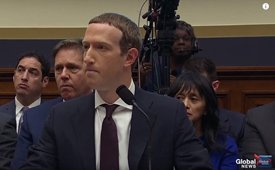 extraordinary amount of pushback from governments, central banks, and even the general public.

Lawmakers grilled Zuckerberg for hours not just on Libra, but also on a range of other Facebook-related grievances. A favorite topic was its reluctance to police posts containing false information.

On several occasions, Zuckerberg struggled to answer pointed questions from the committee members. And when the hearing ended, it was clear the embattled tech CEO hadn’t changed any minds.

“Perhaps you believe that you’re above the law, and it appears that you are aggressively increasing the size of your company, and are willing to step over anyone, including your competitors, women, people of color, your own users, and even our democracy to get what you want… In fact, you have opened up a serious discussion about whether Facebook should be broken up.”

It was classic Washington. The hearing on the Libra wasn’t so much about getting information on the proposed cryptocurrency as it was about political grandstanding for the Democrats on the committee.

Many of the Democratic lawmakers spent most of their allotted time lecturing Zuckerberg rather than taking the opportunity to learn about the Facebook cryptocurrency. Often they would ask questions but cut Zuckerberg off when he tried to respond.

Like Bitcoin’s Early Days: Life-changing gains like those enjoyed by Bitcoin’s earliest investors are not out of reach. Angel investors do it all the time by investing in startups when the upside is greatest – before the IPO. Find out how you can, too…

At the same time, Zuckerberg made a few unforced errors himself. When asked for his opening statement, Zuckerberg tried using fear psychology on the committee. He suggested that if the Facebook cryptocurrency was not allowed to go forward, China would win the race to create a global cryptocurrency.

“If America doesn’t innovate, our financial leadership is not guaranteed,” he said. While Zuckerberg has a point, using it as leverage in a congressional hearing probably sent the wrong message.

Zuckerberg is correct – the Chinese government is known to be working hard toward creating a payments-oriented crypto. But the statement came off as a sort of threat: You better let me launch Libra, or else you’ll lose to China!

A global cryptocurrency isn’t a bad idea per se. After all, most cryptos are global. The main issue with Libra is that it would be controlled by a group of businesses (the Libra Association) and linked to one of the least trusted companies in the world – Facebook.

Lawmakers also worry that if Libra becomes widely used, it will at least partially replace fiat currencies like the U.S. dollar. That would undermine the ability of central banks like the Federal Reserve to enforce monetary policy. (Also an outcome crypto enthusiasts favor, though not if Facebook is behind it.)

Then there’s suspicion over why Facebook launched the project in the first place. Zuckerberg has presented Libra as way to “empower” billions of people, particularly the 1.7 billion adults in the world who are unbanked.

But Facebook has another incentive, since Libra would mostly be used on its platform. Such usage would encourage people to spend more time on Facebook, which would generate more ad revenue for the company.

And yet the core idea – a cryptocurrency that makes online payments easier for everyone – is one of the reasons Bitcoin was invented. Creator Satoshi Nakamoto set up Bitcoin to be a self-governing, decentralized network specifically to avoid problems that come with centralized payment systems and government-controlled fiat currencies.

Libra just has too many factors working against it…

Why the Outlook for the Facebook Currency Is Grim

When you come right down to it, the Facebook cryptocurrency really isn’t a major upgrade over fiat. It simply swaps out a central bank with a consortium of businesses. That several big names have dropped out of the Libra Association before the crypto even launched (Visa, Mastercard, PayPal) has dinged confidence in the project as well.

Beyond all that, lawmakers aren’t crazy about company’s poor reputation for protecting user data.

Privacy issues were the subject of Zuckerberg’s previous appearance before a congressional committee in April. Then he was a witness before the joint Senate Judiciary and Commerce Committees. That hearing concerned the harvesting of Facebook users’ personal data by Cambridge Analytica.

And then there’s Zuckerberg’s wooden personality, which makes him profoundly unpersuasive and unsympathetic.

The harsh reality is that regardless of the actual merits of the Libra project, Facebook is the last company anyone would choose to spearhead it.

Even Zuckerberg acknowledged this: “I believe that this is something that needs to get built, but I get that I’m not the ideal messenger for this right now.”

Until recently, Facebook and its partners in the Libra Association had hoped to launch the cryptocurrency in the middle of next year.

After Zuckerberg’s counterproductive testimony – as well as at least one bill, the “Keep Big Tech Out of Finance Act,” pending in Congress – it’s looking less and less likely Libra will ever make it out the door.

An Opportunity as Big as Crypto

Getting into an investing trend early is one of the best ways to maximize profits.

Think of those early Bitcoin adopters who became wealthy when the price shot up from pennies to thousands of dollars. Or the crypto investors who got rich from the first wave of initial coin offerings.

But crypto isn’t the only place to find profits like these. Now, a very special sector of the agribusiness market is poised to yield crypto-like gains.

As medical research in this area trucks on, this could become a $1 trillion global industry. Individual investors could become millionaires practically overnight.

Yes, the numbers are big, but the research backs it up.