The cannabis sector has been on fire recently. Since Nov. 2, the Horizons Marijuana Life Sciences ETF — an industry benchmark — is up by 105.6%, compared to gains of 18.9% for the S&P 500 index in the same period. Recent developments in the U.S. have helped spur this bull run for pot companies, with several states voting during the November elections to make recreational and/or medical marijuana legal…

Further, the Democratic Party, which tends to have a more friendly attitude toward cannabis, now controls all three branches of the U.S. government. Thanks to these tailwinds, the future of the cannabis industry looks increasingly promising, and there are plenty of excellent marijuana stocks to consider purchasing. But there are also companies investors would do well to avoid. Two pot growers firmly on the latter list are Cronos Group (NASDAQ:CRON) and Sundial Growers (NASDAQ:SNDL).

Here’s why neither of these stocks is worth your hard-earned money.

Cronos Group has sometimes been touted as one of the most promising cannabis companies around. Perhaps the main reason behind investors’ enthusiasm is the pot grower’s partnership with Altria. As a reminder, the tobacco giant acquired a 45% stake in Cronos Group for $2.4 billion Canadian dollars in a transaction that closed in March 2019.

Cannabis companies have struggled to find nondilutive ways to raise capital, and for that reason, Cronos’s agreement with Altria was a big deal. Unfortunately, the marijuana player has constantly recorded mixed (if not downright disappointing) financial results, and the fourth quarter of 2020, which ended Dec. 31, was no different.

The company did report revenue of CA$17 million during the quarter, representing a 133% year-over-year jump. But that metric is a lot less impressive than it seems at first. For one, Cronos’ actual revenue numbers are much smaller than those of many of its biggest competitors in the Canadian cannabis market. For reference, Aphria‘s revenue during its comparable period was CA$160.5 million, up 33% year over year. It is much easier for the company with significantly smaller sales to increase its top line by triple-digit percentages.

What’s more, Aphria and Canopy Growth are currently fighting for the top market share in the Canadian cannabis market. While Cronos does generate the bulk of its revenue from its domestic operations, it lags behind its competitors in terms of revenue and market share.

And while Cronos has its eyes set on the U.S. market as well, the company’s revenue in the U.S. during the fourth quarter was just $3.5 million. This did mark a 30% year-over-year increase, but there are much bigger players than Cronos in the U.S. market, too.

Cronos’s net loss of $61.1 million during the quarter was a big drop from net income of $89.8 million in the year-ago period. It would be easier to ignore the red ink on the bottom line if Cronos’s revenue and market share compared favorably to that of its peers, and it would be easier to ignore all of these issues if Cronos boasted a more attractive valuation than its peers — but even that is not the case, as the graph below shows. 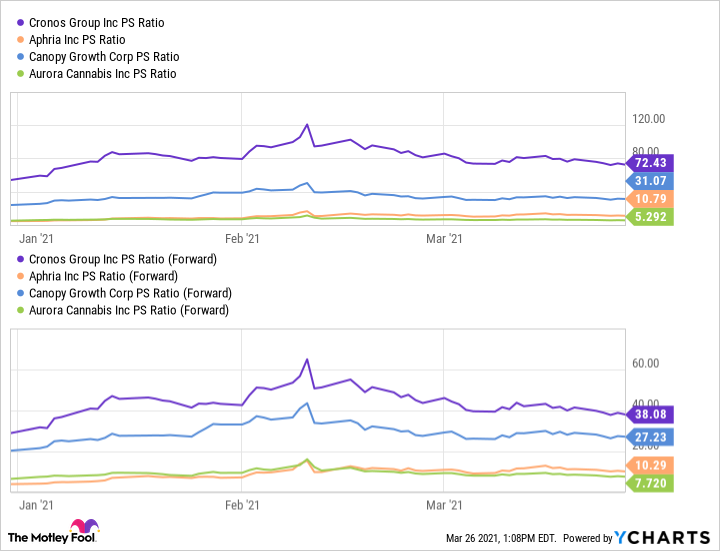 While Cronos may end up turning things around, for now it is difficult to justify investing in this cannabis stock as opposed to others with stronger operations, more impressive financial results, and more attractive valuations.

Penny stocks are worth little more than pocket change for a reason: The market doesn’t see them as great long-term bets. Of course, that alone doesn’t mean all penny stocks are to be avoided, but as a general rule, it is best to proceed with extreme caution when investing in these companies. That brings us to Sundial Growers, a penny stock that has been generating quite the buzz in recent weeks, with its share price skyrocketing earlier this year thanks to traders from Reddit’s r/WallStreetBets who took an interest in the cannabis company.