At an annual growth rate of 20% per year, the marijuana industry has become one of the nation’s fastest-emerging industries. Meanwhile, cannabis stocks have been giving back some mouthwatering gains to investors…

In fact, shares of Green Thumb Industries (OTC:GTBIF), Trulieve Cannabis (OTC:TCNNF), and Jushi Holdings (OTC:JUSHF) have returned 413%, 385%, and 636%, respectively. (Each of these companies operates solely in the States, but has to list on the Canadian stock exchanges to raise capital, as marijuana is still illegal on the federal level in the U.S.)  Let’s look at what they have in store for the future.

With over 56 stores located across 10 states, there is seemingly no end to Green Thumb Industries‘ (OTC:GTBIF) expansion efforts. The company opened 11 dispensaries last year and grew its sales by a stunning 157% from 2019 to $556.6 million. Simultaneously, it reversed its $59.1 million net loss in 2019 to a healthy $15 million profit in 2020.

That kind of performance is pretty impressive, considering the company was founded just seven years ago. Green Thumb Industries has a total of 97 retail licenses and plans to further increase its sales this year to $840 million. Eight times revenue is not a bad price to pay for an annual growth rate of 51%. In addition, the company is well-diversified in its product selection, including vapes, edibles, dried flowers, pre-rolls, and CBD health and beauty products. 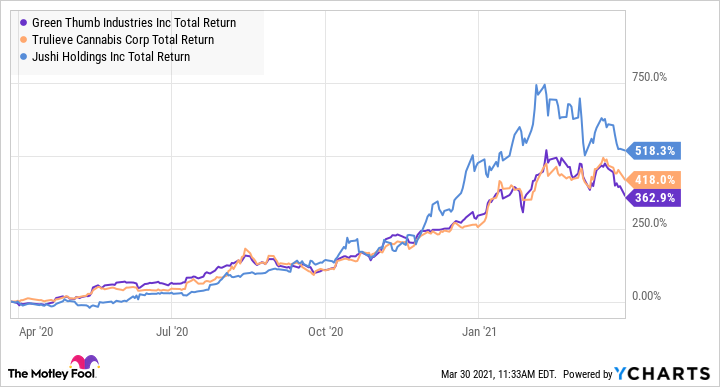 Trulieve is currently the largest pot producer in Florida, with a stunning 53% market share in oils and a 49% market share in dried cannabis. Right now, Florida only allows medical marijuana purchases. The company has a total of 75 dispensaries, with a vast majority of them in the Sunshine State. Last year, its sales went up 106% to $521.5 million.

At the same time, Trulieve’s net income surged by 19% from 2019 to $63 million. This year, management expects to further increase its revenue to $850 million. At a price-to-sales valuation of just 6.8, Trulieve stock still has much more room to go despite a stunning return of 442.7% year over year. What’s more, Republican senators in Florida introduced a bill to legalize recreational marijuana in January. This would be just what Trulieve needs to takes its revenue to the next level.

Trading at just 3.17 times price-to-sales, Jushi Holdings is the cheapest pot stock on our list. With that valuation, you might be thinking that its shares are at a discount because something has gone afoul with its business. That is, however, far from the case. This year, the company expects to bring in between $205 million and $255 million in sales, which is enormous compared to its $80.4 million in revenue last year.

Perhaps investors think Jushi is overtly ambitious with its guidance. I believe the company has…