Even if the nine-year-old bull market has what it takes to keep running higher – which is looking less and less likely with each big swing every other day – it’s a sucker’s bet to leave yourself unprotected against downturns.

Sure, you could buy stocks that have the wherewithal to withstand market crashes, trade wars, and political uncertainty, but they’re pricey right now, just like the entire market.

The P/E for the S&P 500 is up to 25.04, and the yield is 1.96 and getting lower. That’s just not very much bang for your buck; it’s certainly not any downside protection worth the name.

Fortunately, there’s a very cheap form of “insurance” available right now – it doesn’t expire, it’s got intrinsic value, and folks will make a desperate beeline for it when – not if – the market starts to sink.

And investors who are positioned ahead of that crowd will look mighty smart – not to mention very rich – when that happens.

However, these charts tell the tale: My favorite form of protection won’t stay cheap for much longer…

I’m talking about silver, of course, and there are three indicators that tell me it’s one of the smartest, most cost-effective moves you can make right now.

Let me show you…

First, let’s look at the silver price over the past two decades. 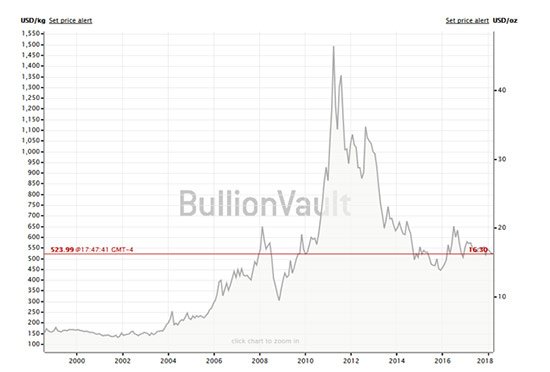 We already know the silver bull market began in late 2001, when its price hit a low near $4. From there, it embarked on a powerful multi-year bull market that took it all the way to $49 in April 2011.

It was a fantastic ride that meant over 1,200% returns for early investors.

But then silver corrected and entered a multi-year bear phase, which has chopped silver’s price down to $13.50 in early 2016.

Since then, silver ended its bear market and is up by 22%, currently priced around $16.57.

Silver is set to climb much higher once again as it returns to bull market action. For silver to regain its 2011 peak, it will need to triple in price.

I think we stand a good chance of that happening over the next few years.

You Must Act Now: America is headed for an economic disaster bigger than anything since the Great Depression. If you lost out when the markets crashed in 2008, then you’re going to want to see this special presentation…

Like I said, odds are very high for the current stock bull to finally peak in the next year or two after climbing for the last nine. When that happens, investors will flock, like they always do, to the tried-and-tested assets like gold and silver.

And while gold is a great option, silver is clearly the better bargain – the smarter buy – right now.

But you don’t have to take my word for it…

While you can judge silver’s value based only on its price, there are other methods that provide for “relative value.”

One of the best such metrics I know is the gold/silver ratio. This simple gauge tells us how many silver ounces it takes to buy one gold ounce at a given point in time.

Over time, this ratio will fluctuate, sometimes considerably. Right now, the gold/silver ratio is just north of 81, which, in historical terms, would be considered very high.

Looking back over the last 22 years, there were four times the gold/silver ratio peaked around the 80 level, then reversed and headed dramatically downward. That’s a good thing for silver owners, because it would mean silver’s price was catching up to gold on a relative basis. 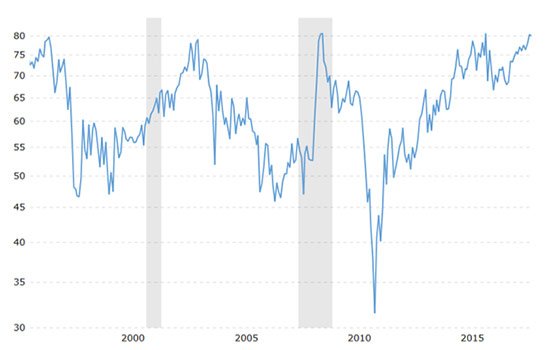 But remember, we are looking at the very real prospect of a bear market here; I don’t expect gold to sit idle.

So by this measure, silver is still very cheap and has much higher to climb.

The third indicator that’s pointing to higher silver is sentiment-based.

One great way to track whether traders are excited or bored by silver is to consider the Commitments of Traders (COT) reports.

Looking at what silver futures speculators and silver hedgers are doing gives us great insight into what the “dumb money” and “smart money,” respectively, are doing.

The other side of that coin is silver commercial hedgers. These are typically silver producers and others who take the opposite side of the speculators’ trades. Here too, at extremes, they tend to drive the markets. 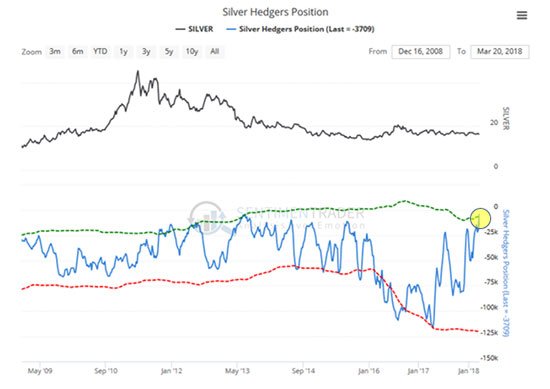 Currently, commercial hedgers are the least short silver they’ve been in decades. And that suggests they see very little downside in the metal’s price from here.

So with three compelling indicators suggesting much, much higher silver prices over the near- and medium- term, here are two great ways to play the silver bull.

Your Insurance and High-Profit “Kicker” Are Here

The first is simple: to buy silver itself, early and often, until you build a position you’re happy with according to your goals and risk tolerance. That’s the ultra-cheap “insurance” I mentioned at the outset.

But… you can get some tremendous leverage from quality, growing silver miners. These prices are also extremely attractive right now.

Coeur Mining Inc. (NYSE: CDE) is a $1.5 billion, U.S.-based miner focused on precious metals. Its main assets are in the United States, Canada, and Mexico, boasting 336 million silver equivalent ounces of reserves at the end of 2017.

Its five operating mines will produce an impressive 36 to 39 million silver equivalent ounces this year, which will be about 7% higher than in 2017. The company has been doing a great job of increasing its reserves and resources over the past four years.

Although all-in sustaining costs will go up, that will happen from one of the lowest levels in many years. At the same time, that’s being balanced with lower development costs, as projects have been nearing completion.

Free cash flow was up substantially in 2017, and grades at several mines have been improving. Over the last two years, silver is up 10%, while Coeur Mining is up 32%. I don’t think those gains are over by a long shot.

Quite the contrary: I expect Coeur to kick into high gear as the silver bull returns, dramatically outpacing silver’s own impressive gains.

On Feb. 27, Chair Jerome Powell revealed the Fed would raise interest rates. What he didn’t say is that those rate hikes could send the U.S. economy into a tailspin… and could very well lead to the greatest economic collapse since the Great Depression.

← Urgent: Bitcoin Is Not Dead
This Marijuana Stock to Watch Could Climb 52% in the Next 12 Months →