Earlier this week, I showed you how Canopy Growth Corp. (NYSE: CGC) was the “King of Cannabis,” the Microsoft of the legal marijuana sector. It’s a huge, bona fide blue-chip pot stock and one every investor – not just those seeking the immense wealth potential of cannabis – should own.

Now it’s time to visit the complete opposite end of the spectrum.

Because small industry players, like the stock I’m going to tell you about in a minute, can be an extremely profitable part of your expanding, rapidly appreciating cannabis holdings.

Get Ready for the Next Leg Up

“Phase I” of the cannabis growth cycle – with a ton of startups and small, insurgent firms entering the market, jockeying for market share – is rapidly coming to an end, if it’s not entirely over already.

“Phase II” is spinning up fast. We’re starting to see massive consolidation, mergers and acquisitions (M&A), and big companies gobbling up smaller ones.

What I want to show you today are those smaller companies – including one in particular – that have what it takes to be competitive with giants like Canopy.

We still want the kings of cannabis in our portfolio, but we’ve got to keep room for smaller players that can make their shareholders a lot of money.

Because during phase II, cannabis stock prices really take off for small companies…

An example of M&A activity for smaller companies I want to highlight is Cannabis One Holdings Inc. (CSE: CBIS). It’s going on an absolute acquisition spree.

Cannabis One Holdings develops, markets, and provides packaging for cannabis-related products, and it is now bringing in actual cannabis products as part of its portfolio.

With all these moves, Cannabis One Holdings could have products, marketing, and packaging services, all under one relatively small “roof.”

But can the small players really survive?

They can, and the soda industry, of all things, is the perfect example that showcases how small companies can still grab a piece of the pie.

Lessons from the Soda Market

In the beverage world, Coca-Cola Co. (NYSE: KE) and PepsiCo Inc. (NASDAQ: PEP) are the two biggest players in the game.

As you can see in the graph below, if someone drinks a soda, virtually anywhere on the planet, it’s probably going to be a Coca-Cola or Pepsi product.

One of the lessons from this is that both companies grew to where they are today because of acquisitions. Coke bought Minute Maid in 1960 and bought a stake in Monster Beverage in 2015. Pepsi acquired Tropicana in 1998 and Naked Juice in 2007. 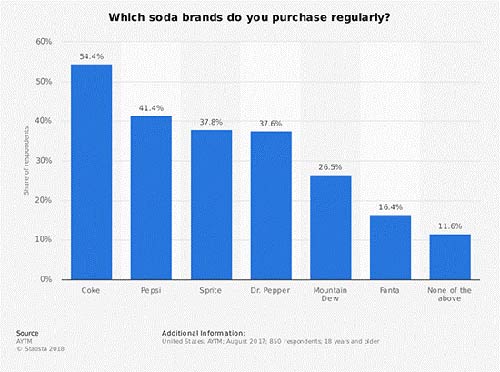 But you’ll also notice that they don’t control all of the market.

There is room for other beverage makers out there, and they can make a lot of money. That’s also going to be true for cannabis companies, especially in phase II – another lesson to take note of.

A smaller company can either sell out to one of the big guys, or it can make nice returns on its own. Small companies can carve out their piece of a pie expected to reach $1 trillion, and early shareholders are going to be rewarded in the long term.

Even though Coke spent $4 billion on advertising in 2018 and Jones Soda has a market cap of just $32 million, Jones still has been in business since 1987.

It’s a carbonated beverage and has a huge cult following. It managed to generate $220 million for the quarter concluding on Jan. 26.

And how about Reed’s Inc.?

Reed’s makes small-batch craft soda, and it has a focus on using real ginger because of its health benefits. So far in 2019, the stock price for Reed’s has climbed 55%.

This shows there’s still a lot of room to carve out a good living in the beverage market for small players – and the same thing is going to be true for cannabis companies.

You don’t have to take on the world if you don’t want to. You just have to be pretty darn good at what you do.